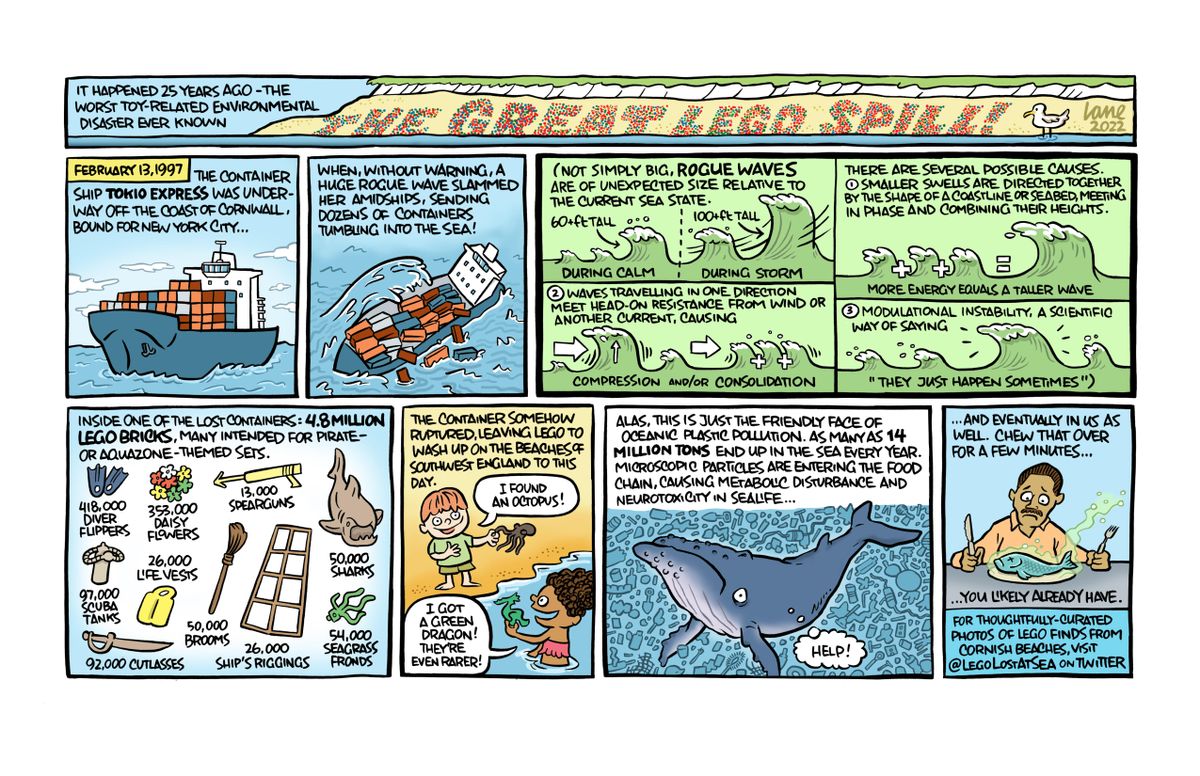 A once-in-a-century wave that pummeled a cargo ship in 1997 caused the worst toy-related environmental disaster of all time. As the vessel Tokio Express pitched and rolled near the United Kingdom’s southwestern coast, 62 shipping containers tumbled off the ship — and one of them dumped nearly 5 million plastic Lego pieces into the ocean.

Soon after the event, which some referred to as the Great Lego Spill, beachgoers in Cornwall, U.K., began finding brightly-colored plastic Legos. Even now, 25 years after the Feb. 13 disaster, numerous Legos from the spill still appear on beaches in Cornwall.

Coincidentally, many of those sea-tossed Lego pieces were nautically-themed. There were tens of thousands of octopuses, life jackets, scuba tanks, diving fins and pirate cutlasses, along with terrestrial shapes such as flowers, “witches’ brooms” and dragons, said British beachcomber and writer Tracey Williams, author of “Adrift: The Curious Tale of the Lego Lost at Sea” (Unicorn Publishing Group, 2022).

Related: How much plastic actually gets recycled?

Williams began collecting beach Legos in 1997 in South Devon, U.K., soon after the spill; more than a decade later, she launched the Lego Lost at Sea Facebook group, where people shared photos of the Legos that they found on British beaches, Williams told Live Science.

“In 2010, I moved to Cornwall to be close to my family, and on my first trip to the beach I noticed Legos from the spill again,” Williams said. “I was amazed that it was still washing up after all that time.”

On that fateful day in 1997, the Lego bricks and objects had been loaded onto the Tokio Express in Rotterdam, the Netherlands, and they were bound for New York. But disaster struck about 20 miles (32 kilometers) off the coast of western Cornwall, in the form of a rogue wave, Cornwall Live reported in 2014.

For centuries, rogue waves — immensely tall and dangerous ocean waves that seemingly appeared out of nowhere — were thought to exist only in maritime legends. However, evidence in recent decades has shown that these waves do exist, though their unpredictability makes them difficult to track and study, according to the National Ocean Service (NOS). Also known as extreme storm waves, rogue waves are thought to form out of merging swells; the resulting wall of water can measure dozens of feet high and may rise suddenly and unexpectedly from a direction other than that of visible surface waves, the NOS says.

The captain of the Tokio Express described the Feb. 13 rogue wave as a “once in a 100-year phenomenon” that first rocked the ship 60 degrees in one direction and then 40 degrees in the opposite direction, according to the BBC. The ship’s manifest listed 4,756,940 Lego pieces that were lost at sea, of which 3,178,807 were light enough to float, Cornwall Live reported. In 2015, the BBC mapped more than 40 beach locations in Cornwall where people had reported collecting wayward Lego bits. Williams and her family have probably collected thousands of Legos since the time of the spill, she told Live Science.

Beachcombers initially found the lighter-weight pieces, such as slippers, flowers, lifejackets and octopuses. Black and green dragons, which were also a common sight on beaches but were slightly heavier by comparison, may have also floated because they contained air pockets, Williams said.

“What we’re finding now are the pieces that sank as well as the pieces that floated,” she said. “It’s providing us with an insight into what happens to plastic in the ocean, how far it drifts — both on the surface of the ocean but also along the seabed — and what happens to it as it breaks down.” But one of the big problems with plastic pollution is that it can take centuries to degrade in the ocean, and as it deteriorates it releases chemicals that can harm animals’ hormones and disrupt their reproduction, according to the American Chemical Society.

In fact, it may be even longer than a few hundred years until the lost Lego pieces break down. When scientists recently analyzed the structure of weathered beach Legos using  X-ray fluorescence, they found that it could take up to 1,300 years for Legos from the 1997 spill to degrade entirely, researchers reported in July 2020 in the journal Environmental Pollution.