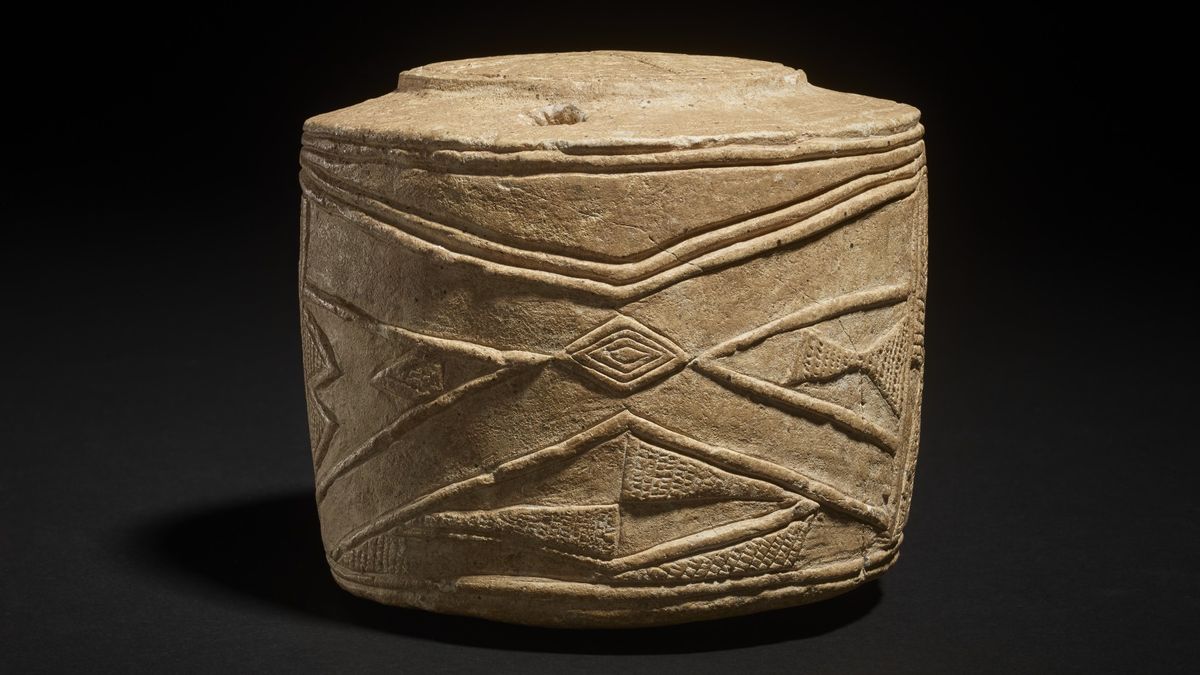 Archaeologists in Britain have discovered a 5,000-year-old sculpture, made out of chalk, that has enigmatic motifs engraved on it. The British Museum called it “the most important piece of prehistoric art to be found in Britain in the last 100 years.”

Found near the village of Burton Agnes in East Yorkshire, the stone sculpture was found alongside a chalk ball and bone pin inside the grave of three children. The archaeologists estimated the three children were 3 to 5, 6 to 9, and 10 to 12 years of age when they died. The two youngest children were found “facing towards each other and possibly holding hands,” said Mark Allen, the director of Allen Archaeology, the cultural resources management company that excavated the site. The eldest child was between and had their arms around the two youngest “as if protecting them,” Allen said in an email. The chalk sculpture was found above the head of the eldest child.

They found the remains of at least 16 other people buried at the site, said Allen. Some of these people date to long after the three children lived, while others may date to roughly the same time period, or about 5,000 years ago.

The sculpture itself has a number of designs on it, including motifs of triangles, diamonds and circles. “The motifs themselves are abstract but may convey symbolism or religious principles that have yet to be deciphered,” the British Museum statement said.

What exactly killed the children is not clear and research is ongoing. “It does seem likely that the three children either died at the same time or within a very close timeframe for them to be buried together as they were,” said Allen. “This [the death of the children] would have been a particularly traumatic experience for the community.”

The sculpture is similar to three other sculptures that were excavated near the village of Folkton in 1889, which is located about 15 miles (24 km) away from Burton Agnes, the British Museum statement said.

The burials date back to about the same time that construction of Stonehenge started, and the British Museum statement said the findings may provide some clues as to what life was like on the British Isles as the famous monument was being erected. Specifically, the finds suggest that people in Britain were sharing artistic ideas.

For instance, the bone pin found with the sculpture is similar to pins found buried with people inside Stonehenge; and the chalk ball is similar to another artifact found at Bulford, near Stonehenge. “Communities across Britain and Ireland were also sharing artistic styles, and probably beliefs, over remarkable distances” at the time Stonehenge was being built, the British Museum statement said.

Several archaeologists with expertise in prehistoric British archaeology told Live Science the sculpture discovery is an important one in the field. Part of what makes the find so important is “the uniqueness of the object,” said Jennifer Wexler, who is a curator at the British Museum. “We’ve been waiting for over 100 years for another one of these amazing [chalk sculptures] to come up,” Wexler told Live Science in an email.

The motifs found on the sculpture can be seen throughout the British Isles around 5,000 years ago. “The beauty of the sculpture’s carvings — spirals and triangles and a kind of hourglass symbol that archaeologists call a ‘butterfly’ motif — are reminiscent of objects found at contemporaneous Neolithic sites: at Ness of Brodgar in Scotland’s Orkney Islands and at the Newgrange passage tomb in Ireland,” said Wexler, those sites also date back around 5,000 years.

The fact that this sculpture was found alongside the burial of children may be important, said Julian Thomas, an archaeology professor at the University of Manchester. Thomas noted that the sculptures found at Folkton in 1889 were also reportedly found near a child burial. These sculptures “may have had some kind of apotropaic significance, either warding off metaphysical influences from the dead themselves, or countering the power of the inauspicious deaths of young people, which may have been considered unlucky,” Thomas told Live Science in an email.

The sculpture was also found within an archaeological context, meaning that the artifacts and human remains found with the sculpture were recorded in detail. “We know of a number of highly decorated objects — such as stone and antler maceheads, carved stone balls — of Middle Neolithic date [around 3400-3000 B.C.] from Britain and Ireland, but it is rare to find them in a good archaeological context,” Joshua Pollard, an archaeology professor at the University of Southampton, said in an email. Because of this, the relationship between the sculpture and the buried children can be examined in detail, said Pollard, noting that one possibility is that the sculpture could have been a protective force, acting as a “guardian” of sorts.