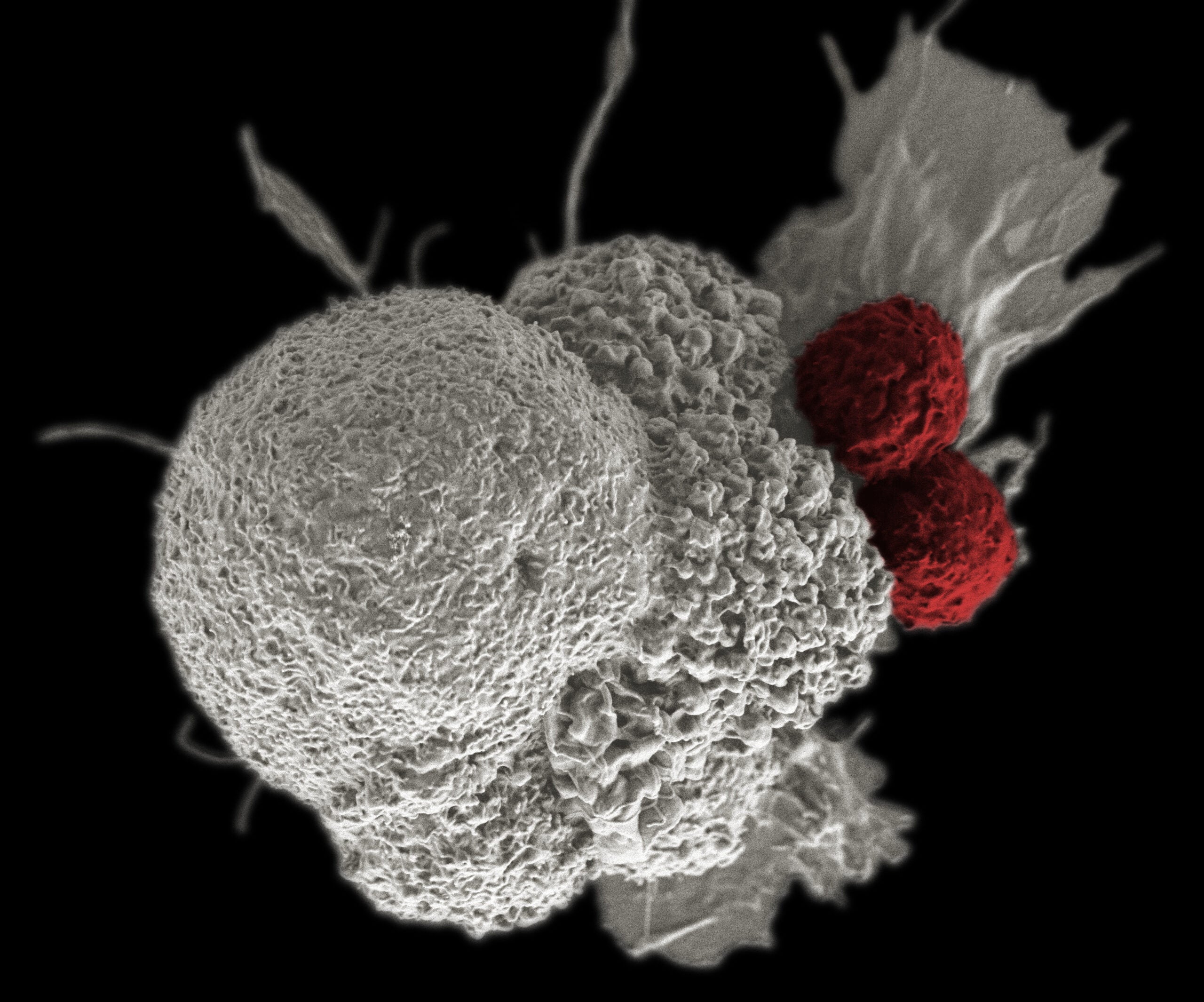 In 2010, three patients received an experimental form of immunotherapy for leukemia through a clinical trial at the University of Pennsylvania. Two of the patients went into complete remission—and stayed that way.

The treatment, known as CAR T-cell therapy, is now FDA-approved to treat certain blood cancers. It involves engineering a patient’s own white blood cells to attack cancerous cells and then returning them to the body. Since clinical trials and FDA approval, CAR T-cell therapy has already been used to successfully treat and clear certain cancers. However, CAR T-cell therapy doesn’t lead to lasting remissions for every patient, and it can cause serious side effects. A new report offers clues about why the treatment is sometimes remarkably effective.

The two patients who responded well to CAR T-cell therapy in 2010 remained disease free for over a decade. One of the men, a Californian named Doug Olson, is now 75. The other, William Ludwig, died early last year of COVID-19. Researchers were able to detect CAR T-cells lingering in Olson and Ludwig’s bloodstreams long after their cancers disappeared, although the types of immune cells that persisted were slightly different than anticipated, the team reported on February 2 in Nature.

“Now we can finally say the word ‘cure’ with CAR T-cells,” Carl June, the principal investigator for the University of Pennsylvania trial, told The New York Times.

Olson and Ludwig were among the earliest recipients of CAR T-cell therapy, allowing clinicians a chance to track the patients’ cells and condition over the past decade. “To use the word ‘cure,’ you really need a long time to follow up to make sure people don’t relapse,” says David Maloney, the medical director of cellular immunotherapy at the Immunotherapy Integrated Research Center at the Fred Hutchinson Cancer Research Center in Seattle. “When we get these people out to 10 and 11 years post-treatment, that encourages us to be a little more forceful in saying that perhaps patients are cured in some cases.”

Steven Rosenberg, chief of the surgery branch at the National Cancer Institute’s Center for Cancer Research, is a little more hesitant about making similar declarations. He and his colleagues treated the first person to receive CAR T-cell therapy—a man with advanced lymphoma—in 2009; like Olson and Ludwig, the patient underwent a complete remission and has stayed disease-free. Still, it’s not impossible for a person’s cancer to come back after such a long time, Rosenberg says.

While it may be too soon to know for certain that these patients are cured, Rosenberg feels, these cases are all very encouraging. “I think it’s a good step in that direction,” he says. “It certainly can last a very long time and provide a relatively normal life back to these patients.”

Immunotherapy treatments harness a person’s immune system to fight cancer. The white blood cells known as T-cells, which form the basis of CAR T-cell therapy, play a variety of roles in the immune system, including attacking cells that have become infected by viruses or turned cancerous. However, the T-cells a person’s body makes naturally may not be equipped with the recognition tools, or may be too few in number, to vanquish their cancer.

The goal of CAR T-cell therapy is to genetically modify T-cells so they can effectively destroy cancerous cells. T-cells are edited to produce a lab-designed protein called a chimeric antigen receptor, or CAR, on their surface. The CAR is tailored to the type of cell that has gone awry. “[You] essentially insert a gene that could make all of the T-cells recognize the same thing,” Maloney says.

[Related: Why immunotherapy could be the cure to cancer we have all been waiting for]

For the clinical trials in 2009 and 2010, Rosenberg’s team and the University of Pennsylvania researchers independently engineered CAR T-cells that home in on a molecule called C19 that’s found on antibody-making B-cells—another immune cell known to become cancerous in certain leukemias and lymphomas. After being administered, the disease-fighting T-cells can multiply by up to 10,000 times over the course of several weeks, Rosenberg says. The patient is treated with their own cells.

“It’s a living drug,” Rosenberg says. “They can survive in the body for years, and they appear to be able to mediate complete, durable [remissions].”

CAR T-cell therapy is now used to treat certain forms of leukemia, lymphoma, and multiple myeloma. But, as the Times noted, it’s more effective against some blood cancers than others. Some people who go into remission later relapse.

To understand why CAR T-cell therapy was so successful for Olson and Ludwig, June and his colleagues investigated the fate of the modified cells. “The surprising thing is that the types of CAR T-cells that actually persisted seemed to be slightly different than what people were anticipating would be the ones that would result in a long-term population,” Maloney says.

The cells that stuck around weren’t the so-called “killer” T-cells that attack diseased cells, but rather “helper” T-cells that are typically involved in coordinating the immune response. Laboratory experiments suggested that, intriguingly, these helper CAR T-cells retained their cell-killing ability.

“We have long realized that there must be differences between CAR T-cells that persist for long periods and those that die within weeks to months from exhaustion,” John E. Levine, a professor of medicine, hematology, and medical oncology and of pediatrics at the Tisch Cancer Institute at Mount Sinai in New York, said in an email. “This paper now defines some of those differences.”

The reason for the lasting response, he said, may be that the CAR T-cells are kept stimulated by the B-cells constantly being made in the bone marrow. “These B-cells provide an endless source of targets for the few CAR T-cells that have the potential to stay healthy and live a long time,” Levine said.

The results could help researchers identify CAR T-cell traits to emulate in the future. “This will lead to a lot of additional work to see how these cells arise and evolve over time after they’re infused,” Maloney says, adding that research clinicians could “potentially make cells that have these characteristics that might be associated with better outcomes.”

Another possible avenue for CAR T-cell research is to recreate the conditions that set these immune warriors up for success when they don’t occur naturally. For example, Levine said, researchers could “provide an artificial source that mimics the constant stimulation of CAR T-cells that seems to help keep them surveilling for malignant cells.”

Understanding more about how these treatments work could ultimately lead to patients receiving CAR T-cell therapy without having to wait until several other lines of treatment have failed. “As we get more data [and] we know how safe they are, we know how effective they are, we can start moving them up, and the future may be that this will be used much earlier in the course of cancer therapy than where we’re currently using them,” Maloney says.

One major drawback of CAR T-cell therapy is that it hasn’t been proven effective against solid tumors found in places like the colon, stomach, prostate, breasts, and uterus, which cause about 90 percent of cancer deaths in the US, Rosenberg says.

There are several reasons for this: “It’s a hostile environment, where the tumor is trying to kill the T-cells and trying to keep the T-cells out of the tumor so they…can’t actually get in there and attack the cancer,” Maloney says. Researchers are working on strategies to make T-cells more resistant to these blocking efforts, he says.

Another problem is that CAR T-cells kill healthy cells along with cancerous ones. When CAR T-cells demolish B-cells in people with blood cancers, the immune system can become more vulnerable to infections. To help avoid this, patients can receive antibody infusions and their antibody-making B-cells may replenish over time, Rosenberg says.

With solid tumors it’s a different story. “You can live without B-cells during that interim by getting immunoglobulin infusions, whereas if you wipe out a liver or a lung or a heart or a brain, you can’t survive,” he says.

Fortunately, solid tumors are often somewhat vulnerable to naturally occuring T-cells, which recognize abnormal proteins specific to these cancerous cells. “The DNA in the normal cells has mutated in these solid cancers…and it turns out it’s the products of those mutations that conventional T-cells recognize,” Rosenberg says.

He and his colleagues have spent several decades investigating treatments that are similar in principle to CAR T-cell therapy to fight solid cancers.

One approach involves identifying which T-cells are best at recognizing a person’s cancer, multiplying these tumor-invading cells to much greater numbers in the lab, and transferring them back into the patient. Melanoma is a particularly appealing target for this treatment because it tends to have many mutations for T-cells to recognize. However, the experimental therapy shows promise for other types of cancer as well, including metastatic breast cancer.

The team is also testing techniques aimed at patients who don’t mount a strong enough immune response on their own. T-cells from these people are engineered to carry lab-made versions of naturally occurring T-cell proteins that will recognize mutations found on their cancer, much like CAR T-cells are equipped with synthetic proteins.

These treatments can be more complicated to implement than CAR T-cell therapy because the T-cells recognize solid tumors by mutations that differ from one patient to the next, rather than a common molecule like CD19. “It’s a very highly personalized treatment, but we’ve shown it can be effective,” Rosenberg says. “The major challenge that we face now is increasing it from isolated cases to treatments that can be widely administered.”

The treatments he and his team are working on and CAR T-cell therapy are all forms of adoptive cell therapy, a branch of immunotherapy that involves multiplying or engineering immune cells from a patient to fight their cancer. The most promising avenue for adoptive cell therapy, Rosenberg feels, will be against the solid tumors in the future

“This entirely new approach of creating a drug for the patient using their own cells has resulted in these dramatic long-term responses that have returned people from being very ill to normal life and certainly is here to stay,” Rosenberg says.