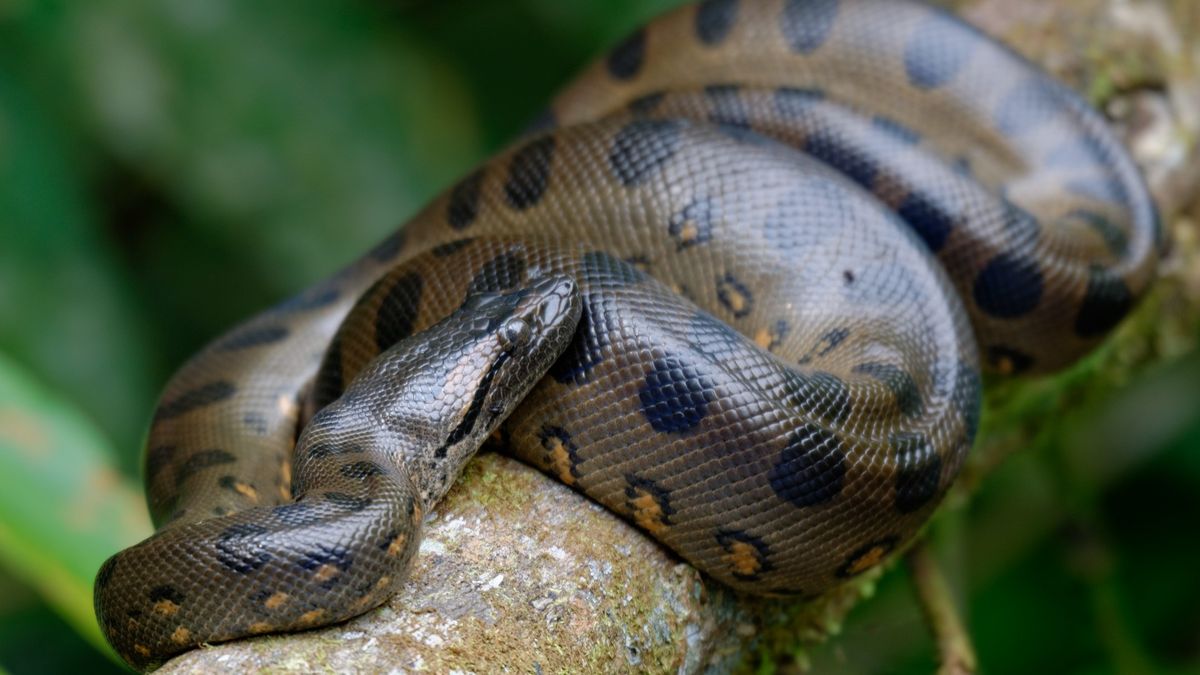 Anacondas are semi aquatic  snakes found in tropical South America, notable in the Amazon and different to pythons. They are some of the largest snakes in the world and are known for their swimming ability. “Anaconda” is the common name for the genus Eunectes, a genus of boa. Eunectes means “good swimmer” in Greek, according to SeaWorld.

There are four recognized species of anaconda, according to Bill Heyborne, a herpetologist and professor of biology at Southern Utah University. They are the green anaconda, the yellow or Paraguayan anaconda, the dark-spotted anaconda and the Beni or Bolivian anaconda. “They can be differentiated from one another genetically, but also based on their size and geographic range,” Heyborne said.

According to the Mythology.net , anacondas feature prominently in South American myths, sometimes appearing as shapeshifters , as the creator of the water, as vicious human-eaters, or as magical, spiritual beings with healing properties.

There have also been reports of anacondas reaching lengths of 40, 50 and 100 feet (12, 15 and 30 meters) — far longer than anything scientifically verified. These reports have given rise to the Giant Anaconda myth, popularized in the early 20th century by explorers and colonists, according to Loren Coleman and Jerome Clark’s “Cryptozoology A to Z“.

Anacondas are stocky, muscular snakes that are thicker than other boas, according to Reptiles Cove. They have thick necks and narrow but large heads. All anacondas have nostrils and eyes on the tops of their heads, which allow them to see above the water while remaining mostly submerged. They have a thick black stripe that runs from the eye to the jaw.

Anacondas have small, smooth scales that grow larger toward the posterior of their bodies. They have loose, soft skin that can handle a great deal of water absorption, according to the University of Michigan’s Animal Diversity Web (ADW).

The taxonomy of anacondas, according to the Integrated Taxonomic Information System (ITIS), is:

Near their cloacal region, anacondas have spurs on their scales. Males have larger spurs than females, though females are overall larger and longer snakes. In fact, anacondas exhibit the largest sexual dimorphism (with the female being larger) of any tetrapod species, according to Jesus Rivas, a herpetologist and founder of the Anaconda Project.

Anacondas’ coloring and size depends on the species. Their spotted, green, yellow and brown color palettes allow them to blend in with tropical rivers and rainforests, according to Sciencing.

True to their name, these are greenish-brown, olive, or greenish-gray. They have black or brown egg-shaped spots on the mid-to posterior back of their bodies. Their sides are sometimes more yellow than green with egg-shaped spots with yellow centers, according to the Jacksonville Zoo.

Green anacondas’ length is still a matter of debate, said Heyborne. They are quite difficult to measure. It is hard to stretch out a captive anaconda, not to mention potentially dangerous for the snake, according to Rivas. People who see anacondas in the wild are likely to overestimate their length due to fear. Also, an anaconda that has recently eaten will look much larger than one that hasn’t, causing exaggerated estimations of size. Furthermore, the skins of dead snakes can be stretched, meaning that it is hard to scientifically verify the length of those, too, especially historical samples, according to Wonderpolis.

While many publications, including National Geographic and the San Diego Zoo list anacondas’ maximum verified length as 29 or 30 feet (9 m), Rivas, who has captured and measured more than 1,000 anacondas, believes they don’t grow much longer than 20 feet (6 m). The Guinness Book of World Records lists the longest snake ever recorded as a 25-foot (7.6 m) reticulated python.

Weights are also not known for sure. Estimates top out at about 550 lbs. (250 kilograms), according to National Geographic, but the average is probably somewhere between 100 and 150 lbs. (45 and 68 kg), according to “The Lives of Amphibians and Reptiles in an Amazonian Rainforest” (Cornell, 2005) by William E. Duellman.

Yellow anacondas have yellow, golden-tan, or yellow-green coloring with black or dark brown blotches, spots, streaks, and dorsal bands. Each snake has a unique pattern of yellow and black scales on the bottom of its tail. The average length is about 9 feet (2.7 m), according to the World Land Trust.

Not much is known about these anacondas, which were long considered a hybrid of yellow and green anacondas until scientists determined they were their own species. Their coloring is similar to the green anaconda, according to World Atlas

These anacondas have dark brown or black spots on a brown background and grow to be about 9 feet (2.7 m) long, according to Charlotte Penhaligan in “Snakes: Essential Wildlife” (Character 19, 2021).

Anaconda in the wild

Yellow anacondas live in Paraguay, southern Brazil, Bolivia and northeastern Argentina, according to ADW. The Beni or Bolivian anaconda is found only in a small part of Bolivia, according to the San Diego Zoo. The dark-spotted anaconda lives in Brazil and French Guiana, according to the International Union for Conservation of Nature (IUCN).

Anacondas live in tropical rivers and swamps, either in the rainforests or grasslands. They thrive in the heat, humidity and dense foliage of the rainforest, according to the San Diego Zoo.

They spend most of their time swimming or lurking in murky, sluggish rivers and slow-moving streams. They sun themselves on branches hanging over water, which they can easily drop into if needed, according to All Things Nature.

Anacondas are most active in the early evening and at night. Their large size makes them cumbersome on land but they can move swiftly in the water. They are solitary snakes and green anacondas have their own home territories,  ADW states. They are adaptable, and snakes that live in grasslands sometimes by themselves in mud and become dormant during the dry season.

Anacondas, like all boas, are non venomous. “Anacondas are powerful constrictors,” said Heyborne. “They hunt for a variety of prey items typically under the cover of darkness.” Anacondas usually lurk in rivers near the banks, where the murky waters and their camouflaging coloring conceals them, waiting for prey to come to drink. Then, they attack. They restrain their prey with their sharp, curved teeth and apply their constrictive killing technique.

There are some common misconceptions about how that constricting works, said Heyborne. One is that it crushes or breaks the bones of the prey. Another is that the snakes suffocate it, squeezing the prey’s lungs too tightly to work. Scientists held this belief until quite recently, when a paper published in the Journal of Experimental Biology revealed what happens to prey animals during constriction. “It turns out that the squeezing overwhelms the circulatory system,” explained Heyborne. “Blood cannot get to the brain, and the animal dies within seconds due to ischemia.” Since anacondas typically constrict their prey in the water, drowning is also a common cause of death.

Once the prey is dead, anacondas swallow it whole. They have a large, unfused ligament on each side of their mandibles and mobile joints in their jaws that allow them to open their jaws wide enough to get around large prey. Their stretchy skin and lack of sternum allows their body to change shape to accumulate their dinner, according to Rivas.Green anacondas are apex predators, meaning that they are at the top of their food chain, according to ADW. Sometimes, however, going after large animals like jaguar and caiman can result in serious injuries or death.

After feeding, anacondas can go weeks or months without eating again, according to National Geographic.

During the spring, females leave a scent trail or emit an airborne chemical to attract males. While females stay in more or less the same location during mating season, males travel great distances to find females. Males have been observed sticking out their tongues to pick up female scents, says San Diego Zoo.

Like much of their lives, anaconda mating takes place in or near the water, according to Pets on Mom, an animal fact site. Anacondas form breeding balls, giant snake swarms in which two to 12 males coil around one female and slowly wrestle for the chance to mate with her. Breeding balls can last for as long as four weeks. Though the males may win by strength, sometimes the female — who is larger and stronger than the males — chooses who she wants. Females may mate with several males during the season.

After mating, females carry their embryos inside their bodies while they gestate for seven months. During this time, females do not feed, possibly because hunting carries the risk of injury, which could harm the babies. Possibly because carrying babies requires such an energy investment, green anacondas mate every other year or even less often, according to Rivas.

“Anacondas are aquatic members of the boa family. And, like boa constrictors, give live birth,” said Heyborne. Inside the mother, embryos are attached to a yolk sac and surrounded by a membrane. When it is time for them to be born, they are pushed out through the cloaca. They are born still in the membrane and must break it. Mothers do not care for their young, who instinctively know how to survive on their own.

Females typically have around 29 babies, though the number is fewer for smaller anacondas and higher for larger ones, according to Rivas.

Anacondas reach sexual maturity between 3 and 4 years of age, according to ADW. In the wild, they live for about 10 years. In captivity, they can live for up to 30 years.

“Currently, anacondas are not endangered and their numbers appear to be more or less stable,” said Heyborne. “However, they do face persecution by humans, as they are often killed on site due to fear of human ingestion.” Human ingestion is unlikely and humans should not kill anacondas. Still, Heyborne said that anacondas’ “biggest threat is undoubtedly the loss of suitable habitat as tropical forests are felled for timber or agriculture.”

Anacondas have a legendary status as man eaters. There have been reports of humans being eaten by anacondas, though none have been verified. The scientific consensus is, however, that an anaconda could eat a human. They eat prey that is tougher and stronger than humans, according to Rivas. Green anacondas are known to eat white-tailed deer, which weigh about 120 lbs. (54 kg), so it is reasonable to assume they could eat a human of at least the same size.

Rivas recounted two stories of his researchers being predatorily attacked by anacondas and surviving. He emphasized that these researchers had spent a good amount of time in anaconda territory, so the snakes were abnormally exposed to humans. Normally, anacondas and humans rarely encounter each other in the wild and humans are not typical anaconda prey.

In December 2014, The Discovery Channel aired a special called “Eaten Alive,” in which a man was to be eaten by a green anaconda. Naturalist Paul Rosolie wore “snake-proof” body armor designed to withstand the snake’s fangs, constriction and digestion so he would survive the ordeal. If the stunt had gone as planned, the anaconda may have regurgitated Rosolie, or the crew would have cut the snake open to get Rosolie out. It didn’t work, however.

The anaconda was not interested in eating Rosolie, especially not in his special suit. The suit was doused in pig blood to make him a more appealing meal, but when Rosolie approached, the snake was afraid and tried to flee. Rosolie then provoked the snake and it eventually attacked. It began constricting Rosolie, who worried that it was going  to break his arm. He cried out in fear and pain and asked the crew to rescue him.

Find more about Jesus Rivas work at’ Anacondas.org. The Smithsonian national zoo contains a full factfile on Green Anacondas including an interesting Fact Sheet which can be found here. Similarly, San Diego Zoo has lots of Anaconda information.