Are there any moons that are made of gas? 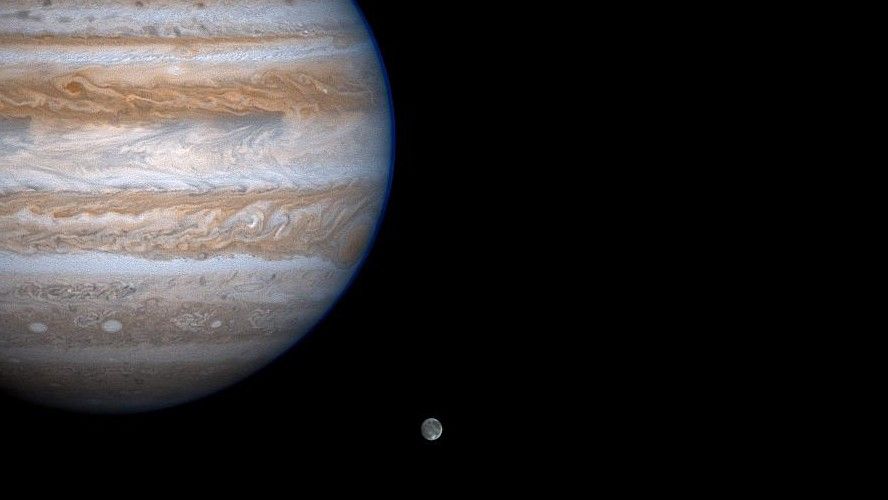 There are some very good reasons why no nearby moons are gaseous. And while we haven’t found a gaseous moon beyond our solar system, it could be possible under the right conditions, said Jonathan Lunine, chair of the Department of Astronomy at Cornell University.

Specifically, it would depend on the moon’s mass, its surrounding temperature and the influence of tidal forces — that is, the gravitational pull of a nearby body, like its host planet.

Related: Could the moon ever be pushed from orbit, like in ‘Moonfall’?

To illustrate how these conditions might affect a gaseous moon, imagine that our own moon’s rocky composition were replaced with pure hydrogen. Hydrogen gas is much less dense than rock, so right away, the moon would grow to about the size of Earth, Lunine said.

In fact, the enormous size of gas giants like Jupiter is one reason they can exist. If they were too small, the force of gravity wouldn’t be powerful enough to hold those light elements together.

But size isn’t the only factor at play; there’s also temperature.

“Let’s take the moon as it is — as a rock,” Lunine told Live Science. “And then let’s put a hydrogen atmosphere around it. We know that hydrogen atmosphere is going to escape very quickly just due to thermal effects.” In other words, the warmth of the sun would cause the hydrogen to evaporate away.

“And so what that would tell me is, an entirely hydrogen-composed Earth’s moon at the distance of the Earth from the sun is not going to be stable,” Lunine said. That’s true even as far out as Pluto’s orbit, he added.

But even if our imaginary gas moon were the size of Earth and the surrounding temperature were very cold, its host planet would still probably rip it apart.

“Remember that the Earth’s moon is subject to tidal forces from the Earth,” Lunine said. “So it’s actually not a sphere. It’s pulled out a bit, but it doesn’t get torn apart because it has some material strength associated with it.”

That’s not the case with the hypothetical gaseous moon. “Because it’s a gas and not a solid — even if it’s very cold — if it’s orbiting around something else, it’s going to get tidally stripped and torn apart by tides,” Lunine said.

So how could a gaseous moon ever be possible? The moon-planet system would have to be either very distant and cold, or very big.

“If it’s the size of our moon, anywhere in our solar system, it’s not going to work right. Way out in the depths of interstellar space? There, it’s a question mark,” Lunine said. “If you want to make something super big, like a Neptune around a Jupiter, then sure, you can do it.”

In that case, the gravitational forces holding these huge bodies together would likely keep tidal forces from destroying the Neptune-size moon.

“That could be perfectly stable,” Lunine said.