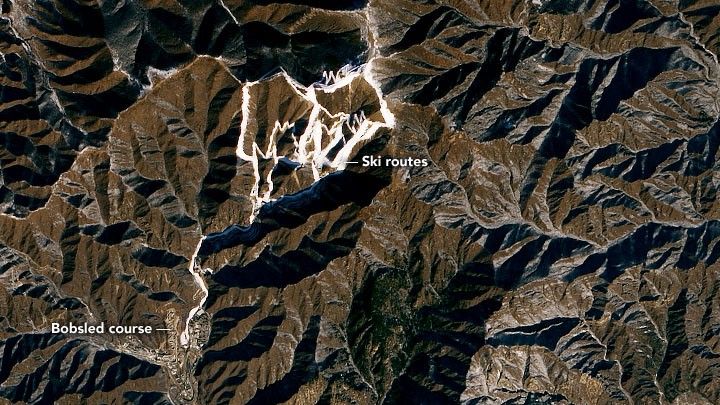 A striking new satellite image shows the stark contrast between artificial snow and the otherwise arid and rocky mountains being used at the Winter Olympics in Beijing.

The photo, which was captured by the Landsat 8 satellite on Jan. 29, shows the Yanqing Olympic Zone on Xiaohaituo Mountain, nicknamed “the rock” and located around 46 miles (74 kilometers) northwest of Beijing. The area is being used to stage sliding sports (bobsled, skeleton and luge) and Alpine skiing, all of which require long tracks of snow or ice, which require thousands of cubic feet of snow. However, the region receives an average of only 1.3 inches (3.3 centimeters) of snow in February, according to NASA’s Earth Observatory.

As a result, the Beijing Games, which officially began on Feb. 4, are the first Winter Olympics that will require virtually 100% artificial snow for all snow-based sports, which also include ski jumping, freestyle snowsports and cross-country skiing, according to a new report written by researchers at Loughborough University in England. The use of artificial snow has caused considerable controversy and led to backlash from environmentalists and some of the competing athletes.

Artificial snow requires an enormous amount of water and energy to produce. In the new report, the researchers estimate that the Beijing Games will use at least 42.4 million cubic feet (1.2 million cubic meters) of artificial snow, which, in turn, will require around 59 million gallons (223 million liters) of water to make. To make that much snow, organizers have installed 300 snow cannons powered by 130 generators that are supplied by eight water cooling towers and three pumping stations.

China has claimed that the Winter Olympics will be powered using 100% renewable energy, according to the BBC.

Artificial snow also poses a number of other environmental issues, according to the report. To maximize the longevity of the fake snow, chemicals are added to the water to help prevent it from melting. These chemicals can cause significant damage to plants covered by the snow, and runoff into rivers can affect nearby areas. The delayed melting of artificial snow can also disrupt plant and animal behavior, and noise pollution created by snow cannons can affect local wildlife, the researchers wrote.

The composition of artificial snow also makes a difference for athletes; it’s almost 30% ice and 70% air, whereas natural snow is closer to 10% ice and 90% air, according to the report. This difference makes artificial-snow slopes both faster and physically harder than the natural-snow slopes athletes normally train on, which can trip up even the most experienced athletes, the researchers wrote in the new report. The conditions can also make injuries from accidents more severe.

There have already been a number of high-profile crashes in Alpine skiing in the first few days of the current games. American skier Nina O’Brien suffered compound fractures in her right leg after crashing into the finishing area during the giant slalom. Fellow American and medal-hopeful Mikaela Shiffrin also crashed early in both the giant slalom and slalom races, although she avoided serious injury. And in the men’s downhill, German skier Dominik Schwaiger was airlifted to a hospital with a suspected broken left arm after a major wipeout.

Crashes and major injuries have always been a big risk for Alpine skiers, and none of the injured athletes has directly blamed the artificial surface — but this hasn’t stopped fans and commentators from speculating that it may be at least partially responsible. Only after all the races have been finished, will organizers be able to tell exactly how the snow impacted athletes.

However, despite any opposition to artificial snow, climate change could mean more of it at future Winter Olympics. “From the Alps to the Pyrenees, the Rockies to the Andes, snowsports fans are reporting shorter seasons, lower snowfall levels and melting glaciers,” researchers wrote in the report.