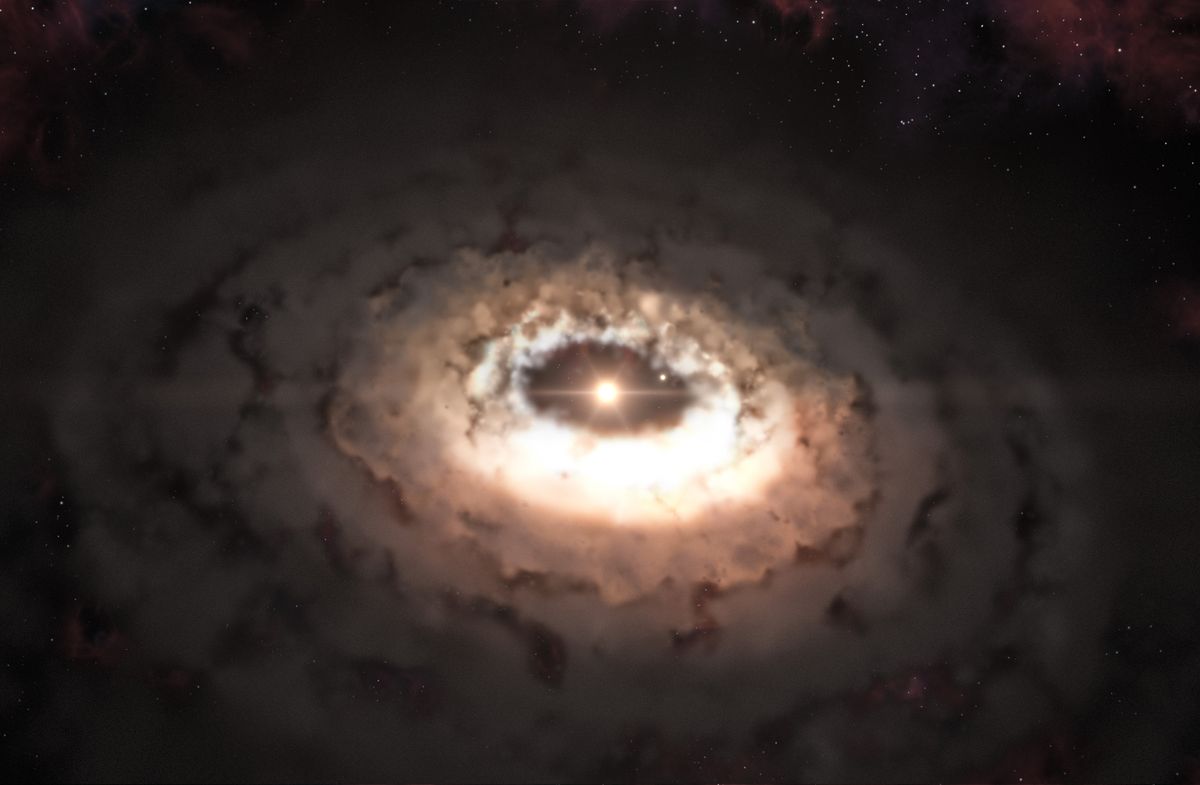 Astronomers have detected the largest organic molecule ever seen in a cloud of planet-forming dust, potentially offering new insights into the way that the building blocks of life end up on planets.

Using the Atacama Large Millimeter/submillimeter Array (ALMA) telescope in Chile, researchers studied the light emitted by different molecules in the lopsided ring of dust and ice surrounding the young star IRS 48, located about 444 light-years from Earth in the constellation Ophiuchus.

Within the dusty ring, the researchers saw clear traces of an organic compound called dimethyl ether — a large molecule that’s commonly detected in stellar nurseries (cold, dusty regions of space where new stars form) and is a precursor to crucial building blocks of life, such as amino acids and sugars, the team wrote in a study published Mar. 8 in the journal Astronomy and Astrophysics.

Made of nine atoms, dimethyl ether is the largest molecule ever detected in a planet-forming ring, the team said. According to the researchers, this discovery helps fill in the story of how complex organic molecules make their way from star-forming regions of space to planet-forming regions, then ultimately to planets, themselves.

“From these results, we can learn more about the origin of life on our planet and therefore get a better idea of the potential for life in other planetary systems,” lead study author Nashanty Brunken, a master’s student at Leiden University in the Netherlands, said in a statement. “It is very exciting to see how these findings fit into the bigger picture.”

The star IRS 48 caught astronomers’ attention about a decade ago, thanks to the massive, cashew-shaped ring of ice and dust surrounding it. Researchers called this lopsided region a “dust trap” — a high-pressure area where tiny particles of dust can clump together into ever larger bodies, such as comets, asteroids and eventually planets.

Astronomers have long suspected that large compounds like dimethyl ether arise in star-forming regions of space, which are cold enough that simple atoms and molecules can stick onto tiny dust particles, forming an ice layer. As they glom together, those icy molecules can undergo chemical reactions, forming larger and more complex organic compounds, according to the study authors.

But dust traps, like the one surrounding IRS 48, may also serve as deep-space laboratories where molecules can undergo chemical reactions, the researchers said. Within that nut-shaped disk there is also a reservoir of ice, which appears to be full of icy dust grains harboring organic molecules. When radiation from the nearby star sublimated that ice into gas, those frozen organic compounds were released, making them detectable to telescopes back on Earth.

Studying the light emitted by those molecules, the team identified the signature of dimethyl ether, as well as several other organic compounds never seen in a planetary disk before, including methyl formate — another organic compound that serves as a building block for larger, life-essential molecules.

“What makes this even more exciting is that we now know these larger complex molecules are available to feed forming planets in the disc,” study co-author Alice Booth, also a researcher at Leiden Observatory, said in the statement. “This was not known before as in most systems these molecules are hidden in the ice.”

In future studies, the team hopes to inspect the very inner region of IRS 48’s disk, where Earth-like planets may be forming, the researchers concluded.