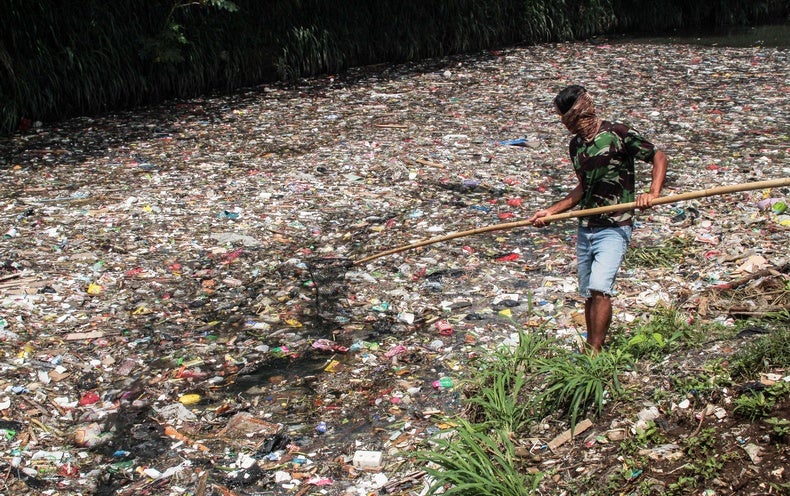 Officials from 175 countries agreed yesterday to craft a global treaty over the next two years with the aim of ending plastic pollution.

The final treaty could be a game-changer for lands and oceans awash in plastic bottles and packaging. Castoff plastics choke and entangle animals, are ingested by people as tiny particles in food, and lead to higher greenhouse gases.

The resolution agreed to yesterday came during an annual assembly of the United Nations Environment Programme (UNEP) in Nairobi, Kenya. When the gavel landed, officials stood up to clap and pump fists.

Inger Andersen, executive director of UNEP, called yesterday’s decision “the most significant environmental multilateral deal since the Paris accord” on global warming.

What happens next will determine the strength and shape of the treaty.

“This is only the end of the beginning, we have lots of work ahead of us, but it is the beginning of the end of the scourge of plastic on this planet,” said a visibly moved Monica Medina, the U.S. assistant secretary of State for oceans and international environmental affairs. The U.S. offered support for the plastic treaty earlier this year, in a shift from the previous administration.

Over the next two years, a negotiating committee will outline the contents of a legally binding treaty that will look at how plastic is produced, designed and disposed of—what’s known as its life-cycle.

The committee will consider ways to reduce plastic pollution across the planet. It will also discuss the creation of a finance facility to support the goals of the treaty and ways to monitor progress toward achieving them, including through national action plans.

“I think some of the thornier issues will be around what kind of goals will we be setting, how will we be measuring this and what speed of implementation is it that we would wish to see,” said Andersen, the UNEP leader.

Businesses, including plastic producers, will have to get involved, she said. And there will need to be discussions about whether to set targets for reducing the use of hydrocarbons—such as oil and gas—in plastic production.

That could rub fossil fuel producers the wrong way. Much of Saudi Arabia’s plan for cutting its emissions, for example, hinge on a circular economy where hydrocarbons would be reused or recycled (Climatewire, Nov. 8, 2021).

The International Council of Chemical Associations, a group that includes the American Chemistry Council, which has backed a controversial push toward chemical recycling in the U.S., issued a statement in support of the resolution (Greenwire, Feb. 28).

“Specifically, the broad mandate of the resolution provides governments with the flexibility to identify binding and voluntary measures across the full lifecycle of plastics, while recognizing there is no single approach to solving this global challenge,” it said.

The treaty could also include voluntary measures, according to the resolution. And some countries, such as the United States, have advocated for a mix of both.

“There is no one-size-fits-all solution to mitigate and prevent the discharge of plastic into our ocean and lands,” Medina told E&E News earlier this week. “We’re thinking about this in terms of being as innovative as possible and not having a prescriptive and top-down approach.”

While environmental groups have cheered the resolution, they also acknowledge that specific measures will likely be the subject of fierce negotiation.

“We’ve been here before,” she said, pointing to previous treaties as evidence.

The Montreal Protocol, which oversees the global phasedown of ozone-depleting substances, is now ratified by every country on Earth. In 2013, UNEP landed the Minamata Convention that aims to protect human health and the environment from the harmful effects of mercury. And then in 2015 came the Paris Agreement, under which countries agreed to reduce their greenhouse gas emissions.

Still, groups that focus on plastic waste have been fighting an uphill battle to eliminate its use entirely—not just improve recycling or waste management.

Currently, around 11 million tons of plastic flow into the oceans each year. That number is projected to nearly triple by 2040. Current commitments by governments and industry will reduce that volume by less than 10 percent over the next two decades, according to a study by the Pew Charitable Trusts.

Of the roughly 300 million tons of plastic waste produced each year, only 9 percent is recycled.

Plastic also accounts for a significant and rising chunk of greenhouse gas pollution. By 2050, plastic production, use and waste could account for 15 percent of emissions, making it hard to maintain a safe climate without reducing carbon elsewhere, according to a UNEP assessment.

“We built an entire economy based on convenience and single-use plastic,” Andersen said at the opening of the U.N. summit earlier this week. “Decades later, we’re paying the price of that decision.”

That makes yesterday’s resolution feel momentous to some environmental advocates.

“If you look back at the path that has been traveled over the past five, six years, we have come such a long way,” said David Azoulay, director of the environmental health program at the Center for International Environmental Law.

When Azoulay first attended the U.N. environment assembly in 2016 and raised the idea of a treaty to eliminate plastics, he said people looked at him like he still believed in Santa Claus.

“Here we are six years later and the entire U.N. membership is rooting and putting their force behind exactly this,” Azoulay said.

Yesterday’s resolution stems from earlier proposals put forward by Japan and India and another by Peru and Rwanda that earned widespread support. Thirty-four countries in Africa alone have already banned single-use plastics. More than 120 companies and hundreds of civil society organizations have also backed calls for a treaty.

“Citizens in all parts of the world are really concerned and are really pushing their governments to agree to this in an ambitious timeline,” said Eirik Lindebjerg, global plastics policy manager at the World Wildlife Fund.

The assembly takes place as Russia’s invasion of Ukraine has brought the issue of global cooperation into the spotlight. That was something to which several delegates pointed, including Espen Barth Eide, Norway’s minister for climate and the environment and president of this year’s U.N. assembly.

“In my view, the backdrop that we have from the conflict around Ukraine almost worked to galvanize us here, to say we really need to demonstrate that something works in this world, that multilateralism is meaningful,” he said.