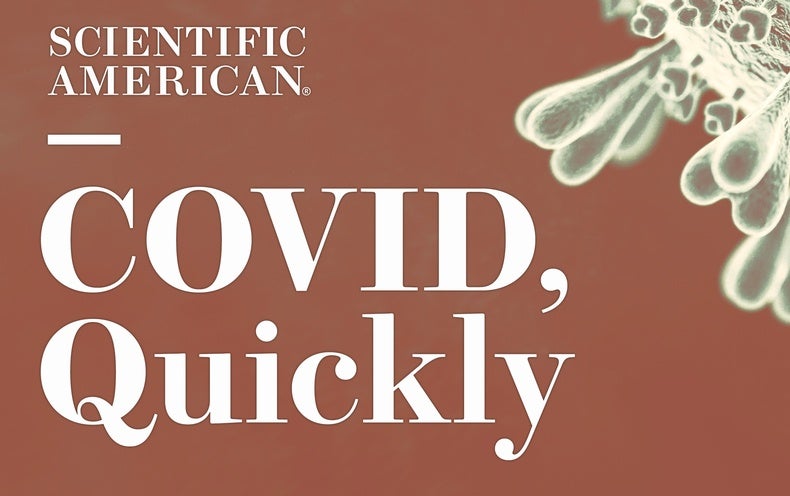 This is your fast-track update on the COVID pandemic. We bring you up to speed on the science behind the most urgent questions about the virus and the disease. We demystify the research, and help you understand what it really means.

Today, new research shows how old cold viruses may help protect you against the coronavirus causing the pandemic, and vaccine makers are not rushing out shots against the Omicron variant, even though the original shots have lost some effectiveness. What’s the holdup? We’ll explain.

From early in the pandemic, its been clear that not everyone is equally vulnerable to SARS-CoV-2, the coronavirus that causes COVID. Some people get really sick, while others have mild symptoms or none at all. And this was true before any of us were protected by vaccines. Overall about 80 percent of infected people get a mild illness.

The virus is so wildly infectious, though, that the 20 percent of serious cases have been a global catastrophe. Five and a half million people dead, 850,000 of them in the U.S.

But in people who don’t get very ill—what’s protecting them? We hear a lot about neutralizing antibodies, but this is a new virus to us. You don’t get antibodies until after you’ve been exposed or vaccinated.

It turns out some people might be getting help from another part of the immune system—T-cells, which were triggered years ago by exposure to different but related coronaviruses. These microbes have been with us forever, and they cause sneezing and runny noses: the common cold.

Ajit Lalvani, an infectious disease physician at Imperial College London, decided to find out. England has a really good contact tracing system. It allowed Lalvani and his colleagues to find 52 people who lived with individuals who tested positive for COVID. These 52 started out negative themselves. Within about 3 days, half of that group, or 26, turned positive. The other 26 stayed negative.

Taking a closer look at the negative people, who didn’t get COVID, Lalvani’s team found that 7 of them had a lot of these cross-reactive T-cells. None of the people who got COVID had such cells. Zero. Lalvani told me this is a very substantial protective effect, and his team just published the results in the journal Nature Communications. The T cells, primed by the older cold virus, recognize the new pandemic virus because it has those similar proteins, and they work to fight it off.

Immunologist Alex Sette, from the La Jolla Institute for Immunology, told me he thinks this research is on the right track. Other studies have linked recent exposure to these cold viruses with less severe COVID, says Sette, who was not involved in Lalvani’s work. Research has also tied pre-existing T-cells to a stronger immune response to a COVID vaccine.

The important thing about the T-cells is they point to new targets to add to second-generation vaccines. The proteins these T-cells reacted to went beyond the well-known spike protein at the heart of the first-gen shots. The cells respond to other proteins called N and O-R-F, for instance.

Adding those to a new vaccine formula, both Lalvani and Sette suggest, could widen the protection of vaccines against variants. The proteins do seem to trigger a broader immune response to different forms of the coronavirus.

A few companies have such “T-cell enhanced” vaccines in the works. Gritstone and ImmunityBio, biotech firms in California, are two that have started clinical trials.  Including more of these proteins in a shot could create a vaccine capable of boosting your immunity against whatever variant comes along.

The variant that has come along right now is, of course, Omicron. And it is Exhibit A for the case that vaccines rolled out a year ago have lost a bit of their edge.

Remember the original vaccine trials showed Pfizer and Moderna shots were 90 to 95 percent effective at stopping infection. Now two shots of the Pfizer vaccine are only 33 percent effective at stopping Omicron infection, scientists looking at cases in South Africa found. A booster shot does increase the amount of Omicron-neutralizing antibodies. And the Moderna and Pfizer vaccines, with that booster, are tremendously effective at preventing hospitalization and serious illness.

Still, Omicron’s wild spread has many people asking why we don’t have a specific shot to stop it? MRNA vaccine makers have been saying they could roll out new formulas really fast if needed. But my colleague Charlie Schmidt did some reporting on this for Scientific American, and he found out that “really fast” may not be fast enough.

Designing a variant vaccine, then testing and mass producing it, can take four to six months. But now we know variants can burst out in shorter time periods, followed by other variants. That makes companies reluctant to change all their production over to a shot that may be irrelevant by the time it reaches your arm.

As long as the current shots keep hospitalizations down, we should stick with them, says Paul Offit, a vaccine specialist at Children’s Hospital in Philadelphia. Right now hospitalizations are running at about 2 percent of cases. Offit says if that number climbs to 15 percent, then its time to change to a new shot.

Not everyone agrees. Ralph Baric, a virologist at the University of North Carolina, told Schmidt that Omicron could be the backbone for the next set of variants since it is so good at spreading. So vaccines designed around Omicron could offer more protection against future waves.

What Baric would really like to see is a more universal vaccine that covers more variants, so we’re not constantly playing catchup. The T-cell stimulating shots I mentioned are one way to get there. So are vaccines that incorporate proteins from several closely related coronaviruses.

Researchers at the University of Washington are working on one of those, using proteins that don’t mutate much, so they should work from variant to variant. Other groups are trying related approaches.

But it might be two years before those are ready. So companies may have to bite the bullet and roll out intermediate vaccines to keep us protected in the meantime.

Now you’re up to speed. Thanks for joining us.

Come back in two weeks for the next episode of COVID, Quickly! Stay safe, and check out sciam.com for updated and in-depth COVID news.

[The above is a transcript of this podcast.]