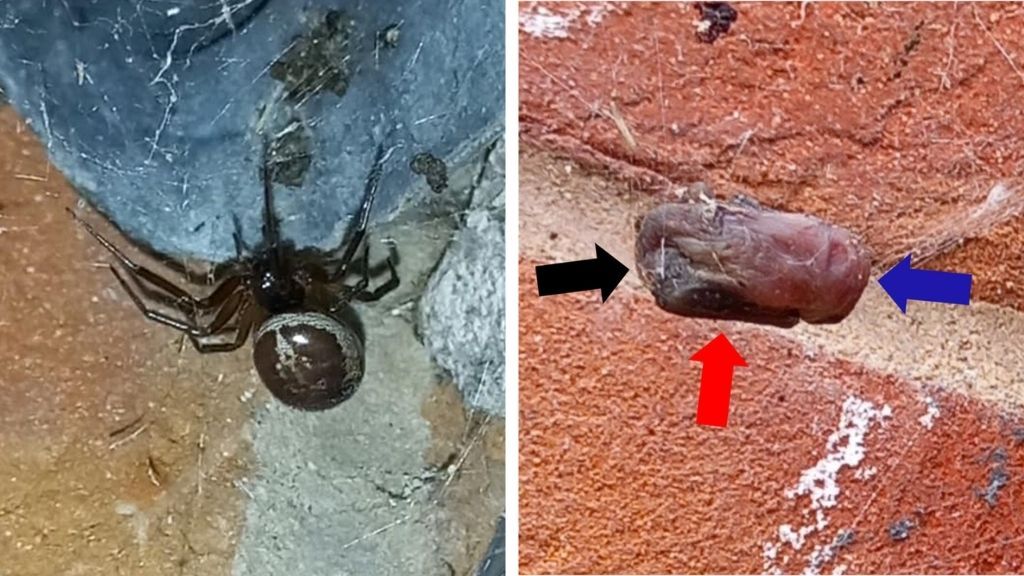 An invasive spider in the U.K. snagged two bats in its web, and only one bat survived the grisly encounter, thanks to the help of a local resident who freed the entangled creature before it met its doom.

The noble false widow spider (Steatoda nobilis) originally hails from the Madeira archipelago and Canary Islands in the North Atlantic Ocean, but the species is now found in other parts of Europe, as well as in Asia and the Americas. The black widow look-alike reached southern England in 1879 and has since spread toward Scotland and into Wales and Ireland, according to a statement.

Prior to a new case report, published Feb. 21 in the journal Ecosphere, no spider in the Steatoda genus had ever been observed preying on bats — or any mammal, for that matter. But last July, Ben Waddams, a wildlife artist based in Shropshire, England, snapped photos of several bats trapped in a S. nobilis web at his home.

He shared the snapshots on social media, where they soon drew the attention of researchers at the National University of Ireland (NUI), Galway, Michel Dugon, head of the Venom Systems Lab at NUI Galway and senior author of the study, said in a video. “We actually understood very quickly that this was a first,” Dugon said.

Based on Waddams’ photos, the team identified the spider as a mature female S. nobilis. The bats that fell victim to the spider’s trap belonged to a colony living in Waddams’ attic, according to the report. The spider had constructed its web directly beneath the entrance to the bat colony’s roost, in an area spattered with bat droppings.

In July 2021, Waddams noticed a dead bat pup suspended in this opportunistically placed web, its wings tightly pinned against its silk-wrapped body. The posterior end of the young bat appeared purple and shriveled, suggesting that the spider had been feeding on the animal, the researchers observed.

The venom of S. nobilis is a potent neurotoxin that carries some of the same toxins as the venom of true black widows (Latrodectus); past research found that the spiders use this venom to immobilize and feed on small vertebrates, including lizards, the authors noted in their report.

“False widow spiders, just as their close relatives black widow spiders, have extraordinary prey capture techniques and remarkably potent venom, which allows them to capture small vertebrate prey many times larger than the spider itself with surprising ease,” study co-author Aiste Vitkauskaite, a researcher at the Venom Systems Lab, said in the statement.

The remains of the baby bat’s body fell to the ground by the next day, but at that time, an adult bat had become trapped in the same web, Waddams noticed. In this case, the bat was still alive and not yet swaddled in silk when he observed the animal, so he scooped the bat from the web and placed it on the adjacent wall. The rescued animal then crawled back up toward its roost.

Pipistrelle bats are protected under the Wildlife and Countryside Act and the Conservation of Habitats and Species Regulations, according to the statement. This means that people can incur fines or prison time if they capture, injure or kill the bats, or if they damage or obstruct access to their breeding or resting places, for instance, according to Natural England and Department for Environment, Food & Rural Affairs.

“This study presents yet another example of the invasive impact by the noble false widow spider on native species,” first author John Dunbar, an Irish Research Council postdoctoral fellow in the Venom Systems Lab, said in the statement. In a previous study, published in 2018 in the journal Biology and Environment: Proceedings of the Royal Irish Academy, the team reported that the spider also preys on the viviparous lizard (Zootoca vivipara), a protected species in Ireland.

“We know they are much more competitive than native spiders, and this further confirms their impact on prey species,” Dunbar said.

Species of bat-eating spiders have been identified on every continent except Antarctica, and the arachnids typically prey on small or juvenile insect-eating bats that are unfortunate enough to get snagged in their webs, Live Science previously reported. Now, S. nobilis joins the list of spiders that pose a threat to the fuzzy, flying mammals.