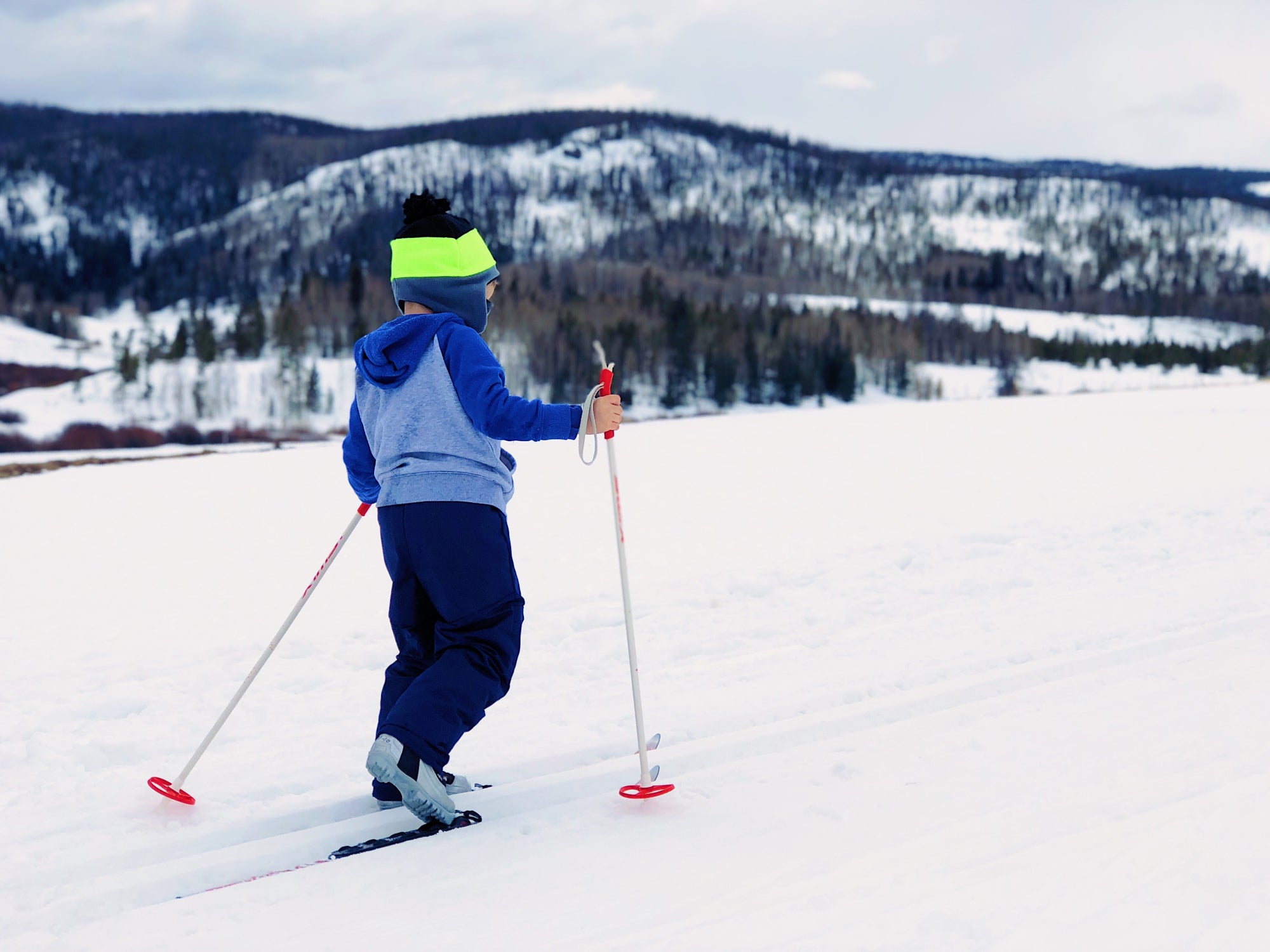 Winds whipped the frigid peaks above Woodstock, Vermont, and I prepared myself to potentially ruin my young daughter’s day. As much as she loves downhill skiing, that simply wasn’t going to happen—hitting the slopes felt like we’d be risking frostbite to most of our toes. Closer to sea level, conditions were calmer and warmer, but I doubted she’d enjoy the slower speed and greater effort of cross-country skiing.

Still, she and I drove to the Woodstock Nordic Center. A golf course outside of winter, the snow chases away golfers and the links lend themselves, along with the surrounding woods, to Nordic skiers. Despite her initial surprise at the heel-less bindings, she was excited to stab at the snow with her poles—tools most young skiers forgo in alpine.

We aimed to complete an easy and mostly flat mile-long trail, looping around the golf course. The path began with a hill, which meant she’d have little control at the start of our voyage. I worried my daughter would hate how she couldn’t pizza-stop as easily, and how she’d dread using her strength to cross flat ground. To my delight, however, she loved it, appreciating the sport for both the quality of exercise and the fun. Even the fun of falling.

“I could have done that for a whole year without stopping,” she said after our return to the Woodstock Inn, where a few artifacts of the sport hung on the wall. She studied the old skis, the way a young slugger might marvel at a Babe Ruth bat in Cooperstown.

Ultimately, my change of plans paid off, but if you’d rather ease a child into cross-country skiing, there are several ways to get them excited to try this invigorating sport.

When kids should start cross-country skiing

I decided to introduce my oldest daughter to cross-country skiing at eight, but I refused to take my five-year-old along. Reese Brown, the executive director of the Cross Country Ski Areas Association, recommends the sport to kids as soon as they can walk. A few years ago, I had a similar philosophy to Brown’s, but for downhill skiing. When my youngest was two, I put her on downhill skis and it took five instructors equipped with pool noodles to get my crying toddler down the hill. She rejected winter activities—everything from sledding to making snow angels—for the next three years.

But cross-country skiing is much different than alpine: “The barriers to entry for cross country skiing are very low, and the experience is much more user friendly,” Brown says.

Ski right out the front door

On a snowy day in my neighborhood, I often opt to ski out the front door instead of loading my skis into the car to find better terrain in the woods and at the nearby golf course. There’s a small window between the time the snow gets packed down in the streets and when the plow comes through to reveal the asphalt. But I try to venture out into the neighborhood on skis so my kids can see how accessible and novel the sport can be. Now that my daughter is a fan of the sport, she’s looking forward to joining me on a lap around the neighborhood once I get her a pair of skis.

Put downhill skis to more use

Last winter, when lift tickets had sold out because of COVID restrictions at most mountains, I realized I was not going to get my money’s worth for my daughter’s downhill ski rentals. To avoid feeling like I’d squandered the rental fee, I brought her and her alpine skis to our local golf course, tied a long rope through the belt loops of my ski pants, and towed her along, venturing deep into the park. Together, we skied down hills and through untouched powder—her first experience riding fresh snow.

If you’re towing a kid behind you, make sure the rope is double the length of your poles, as you don’t want to spear your offspring. For better protection, kids should wear their ski goggles and parents should never swing back their poles, which, for the most part, stay low and aren’t a real hazard.

If you’ve ever seen a parent jogging with their infant in a runner’s stroller, a pulk is the cross-country-skiing equivalent. This carrier attaches to the skier—usually their hips—and gets pulled like a horse-drawn carriage. It’s a good way to inculcate toddlers on the joys of the sport.

While most gear that works well for downhill is appropriate for cross-country skiing, things get a little trickier with gloves. A bulky mitten might make it difficult for kids to properly grip the poles, so you’re better off with gloves that are comfortable, warm, weatherproof, and allow for good dexterity. If you’re not ready to splurge on quality gloves that are good for cross-country skiing, shove extra pairs of inferior gloves into your pockets for when your kid’s hands get soaked.

Golf courses offer both flat stretches and the option for terrain that rolls and dips straight into snow-covered sand traps. Crossing wooden bridges without railings over a partially frozen river can make the sport feel like an epic adventure. Venturing into the serene, picturesque woods can transform the experience exponentially.

In Stowe, Vermont, the Spruce Peak Outfitters sets up a wintertime scavenger hunt in the forest for kids, asking them to search for gnomes and other unnaturally placed items. While you don’t have to run through the forest setting up gnomes and wintry baubles in advance of a cross-country ski outing, you can create a nature-based scavenger hunt card and have kids check off cool finds, like red cardinals on a snowy branch, an evergreen, or that elusive dropped mitten.

Get inspired by a quest

The night before a cross-country excursion, sit down with a Tolkien tale or queue up an exciting film. The Empire Strikes Back, for example, features Luke Skywalker riding a wooly tauntaun on the ice planet of Hoth. A few minutes of that film before a ski outing can transform any snowy, barren landscape into the search for the Rebel Alliance’s Echo Base.