If you love your workout gear, thank the girdles and Flexatards of the past 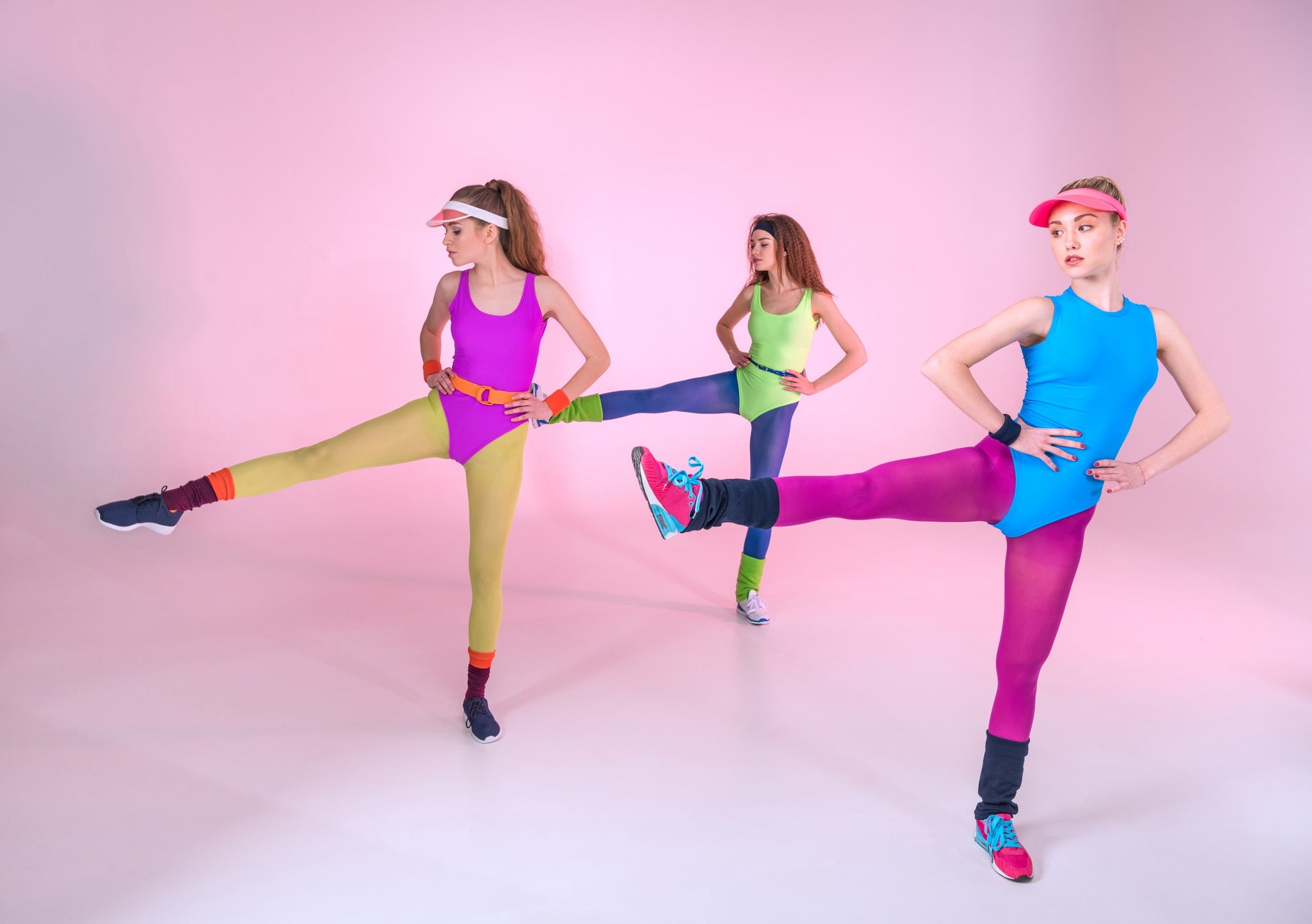 Excerpted from LET’S GET PHYSICAL: How Women Discovered Exercise and Reshaped the World by Danielle Friedman with permission from Putnam, an imprint of The Penguin Group, a division of Penguin Random House, LLC. Copyright © 2022 by Danielle A. Friedman.

The story of how DuPont came to outfit not only [fitness entrepeneur] Gilda Marx and her students but active women the world over is one of American social progress itself. It begins in the 1920s, when the Delaware-based chemical giant—which had spent its first century producing gunpowder—underwent a dramatic rebranding. In an effort to distance itself from the carnage of World War I, the company began to market itself as one that existed primarily to serve women.

“During the explosives period, Dupont’s customers had been male, and its orientation and identity masculine,” writes the anthropologist Kaori O’Connor, who in the early twenty-first century gained rare access to the company’s archives and in 2011 published an investigation into the birth of Lycra. But in the 1920s and 1930s, recognizing that wives now had “asking power” in their homes, it saw pleasing women as a lucrative business strategy. “Better Things for Better Living, Through Chemistry” became its catchphrase.

DuPont delivered on this promise when it introduced women to nylon pantyhose.

From the 1920s through the 1960s, wearing stockings was a requirement of womanhood— veryone did it, regardless of social class. But after surveying women about stockings’ shortcomings, DuPont set out to create an alternative to silk that was sheer and durable but “stable in price and more certain of supply.” In 1939, its scientists had a eureka! moment when they successfully grew the fiber that would become nylon in a test tube. The first nylon stockings went on sale in May 1940; they were so popular, many shops saw riots of women attempting to get their hands on them.

From there, DuPont set its sights on an even more ambitious prize: the almighty girdle.

In the 1940s, as was true with pantyhose, every American woman over the age of around twelve wore a girdle. “In the period when Dupont was casting around for new synthetic fiber opportunities, it was taken for granted that a woman should not appear in public, and hardly in private, unless she was wearing a girdle,” writes O’Connor. Girdles were a “hallmark of respectability” and a prerequisite for looking good in clothes. “The most disapproved-of natural features for which the girdle was seen as the corrective were fat, sag, bulge, and jiggle.” But the experience of wearing a girdle was hellish. This was partly due to the fabric, which was made from rubber-covered thread. “There is no parallel in modern textiles to the stiffness of rubberized girdle fabric, which compressed the body in a way that would now be considered intolerable,” writes O’Connor. She continues:

Getting into a girdle was a complex operation, described to me as “a struggle” and “murder” by women now in their seventies and eighties. This was the case even if the wearer was of normal weight or even thin, because to be effective the rubberized girdle had to fit very tightly, and fastening it up was awkward. If the girdle had hook- and- eye fastenings, the flesh had to be pinched, pushed and prodded out of harm’s way as the edges were pulled together and fastened hook by hook. Zipper fastenings were also challenging—it was difficult to keep the edges together and pull up the zip at the same time, and in the process the flesh often got pinched painfully. . . . Once encased in the girdle, normal body movements like bending and sitting became awkward, eating was uncomfortable, and performing basic body functions could become problematic. One woman recalled: “They used to say we ladies took a long time in the powder room. We weren’t powdering our noses. We were struggling with our girdles.” Once a girdle was removed or lowered, it was almost impossible to get it back on, and many women remembered having to “hold on” until they got home.

When DuPont surveyed American women about their dream innovations, women consistently asked for more comfortable girdles. Given that nearly any innovation would improve on the current models, the company saw the potential for massive earnings. And so, in the early 1940s, its engineers embarked on a multimillion-dollar effort to create the perfect sturdy but stretchy—or spandex, as engineers began to call it, which was an anagram of expands—fiber with which to offer women more forgiving figure shapers.

Fifteen years later, a DuPont chemist named Joe Shivers revealed what he and his colleagues referred to internally as Fiber K. Shivers filed a patent application, and after more testing, by gosh, the men knew they’d done it. Fiber K “stretched and snapped back into place like rubber, but unlike rubber was resistant to deterioration caused by perspiration, cosmetic oils and lotions.” It could be dyed and machine-washed and -dried. It was lighter than rubberized thread but had much more restraining power. The company officially named it Lycra.

At first Lycra girdles were a hit, as demand outran supply.

Then a curious thing happened.

Despite the fact that the first massive wave of baby boomers were becoming teenagers—the age when most women began to purchase figure shapers— girdle sales started to fall. DuPont and the rest of corporate America had assumed that the young boomer women would shop and dress like their mothers. Instead, they were faced with the “youthquake” and miniskirts and Mary Quant.

Throughout the sixties, DuPont poured resources into trying to keep women in girdles. Perhaps it was merely the word girdle to which teens were averse? In 1968, the company helped launch an item it called a “form- persuasive garment,” aimed specifically at the teen market. No luck. Worse, women of all ages started to reject their girdles. When, in 1968, the president of the undergarment manufacturer Playtex learned that his own wife had thrown away her girdles, the end seemed nigh.

Despite popular legend, few women in the late sixties and early seventies actually burned their bras, but most did trash their girdles. “‘Getting rid of the girdle’ emerged as a significant cultural moment, in every sense a defining act of ‘emancipation,’ ” writes O’Connor. “Its abandonment was political action on the personal level, an act of liberation through stuff.”

By 1975, girdle sales were half of what they had been a decade earlier.

Gradually, small professional dancewear manufacturers and seamstresses began to snatch it up to make garments that, they discovered, “hugged the body and moved with it in a way that had never been possible before.”

But it was Gilda Marx who would bring Antron nylon/Lycra leotards to the masses.

In her quest to design the perfect aerobics uniform, one that was both functional and fashionable, Gilda teamed up with a manufacturer who until then had specialized in car seat upholstery. With her home temporarily converted into a leotard laboratory, she experimented with different Lycra blends until she found her holy grail.

In 1975, Gilda introduced the Flexatard, a nylon-Lycra blend leotard with all the support of a girdle and none of the cultural baggage. Flexatards came in long-sleeved, cap- sleeve, and spaghetti strap versions. And they came in dark, chic colors—red and burgundy and navy—and later, yellow and peach and green and raspberry.

She opened a small boutique in her penthouse exercise studio and began selling Flexatards to students, who served as a kind of focus group for her products, providing instant feedback on the designs. She was buoyed by the response from her celebrity clients.

“One day I looked at the back of my class and saw Bette Midler with arms, legs, and everything flying,” she wrote in her 1984 fitness book, Body by Gilda. “She was having a wonderful time”—and wearing a Flexatard. “After the class a panting Divine Miss M bounced up to me and said, ‘I absolutely adored this workout and this leotard is great. It is the first leotard that was ever able to support my chest.’ To a leotard designer, that was the ultimate challenge and the ultimate compliment.”

Gilda and Bob incorporated as Flexatard, Inc., and before long, women in aerobics classes across the country would be wearing her garments. (Those colorful leotards Judi Sheppard Missett wore in her Let’s Jazzercise video? Flexatards!) Dancewear giants Capezio and Danskin got in on the game, too, and began making their own colorful Lycra- blend attire for aerobic dancers.

When anthropologist Kaori O’Connor interviewed women about their memories of slipping into Lycra leotards and leggings for the first time, they told her it felt exhilarating. The fabric bonded women exercisers, they said, by serving as a kind of collective aerobics uniform that “seemed to free the body and hold it, cover it and yet expose it.”

Perhaps most remarkably, many women told her they appreciated that the new workout wear showed their sweat. After all, sweating was now the point. Gilda’s Flexatards were a “harbinger,” writes O’Connor. By the early eighties, Lycra leotards and leggings would burst out of the studio and onto the street, as Gilda and other designers introduced tops, skirts, and shorts that allowed women to come and go from aerobics class without having to change. Leotards also became popular among women who didn’t exercise but liked their fresh, edgy “fashion look.”

Remarkably, in “a striking example of cultural blindness, few in the mainstream seemed to realize that the beloved ‘new’ stretch fiber was the very stuff of which the hated and rejected girdle had been made,” writes O’Connor. “Or that leotards and leggings looked identical to the new all- in- one foundation garments.”

In 1984 alone, American women purchased 21 million leotards. The rise of the leotard represented another paradigm shift in the way women viewed their physicality. “Lycra became the second skin for a new life in which self- confidence would be rooted in women and their bodies, not in rules, dress codes, wearing clothes that were ‘appropriate’ for age or social status, and especially not in wearing girdles,” writes O’Connor. “What had been the ultimate fiber of control now became the defining fiber of freedom.”

Buy LET’S GET PHYSICAL: How Women Discovered Exercise and Reshaped the World here.