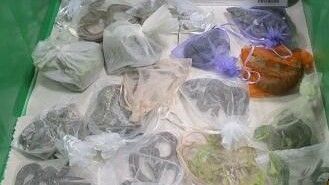 U.S. border officers have caught an accused wildlife smuggler allegedly attempting to cross from Mexico to the United States with more than 50 reptiles concealed in his clothing, just one day after he had been charged with trafficking up to 1,700 animals into the U.S.

The man, a U.S. citizen, was arrested on Feb. 25 on charges of attempting to drive across the border at the San Ysidro Land Port of Entry linking Tijuana, Mexico, to San Diego. Border officers stopped the man, and a personal search revealed 52 live reptiles — nine snakes and 43 horned lizards — inside bags that were concealed in the man’s jacket, pants pockets and groin area, according to a statement from U.S. Customs and Border Protection (CBP).

“Smugglers will try every possible way to try and get their product, in this case live reptiles, across the border,” Sidney Aki, CBP director of field operations in San Diego, said in the statement. Concealing the reptiles in clothes puts animals’ health and safety in jeopardy, Aki added.

The man has been identified as 30-year-old California resident according to The San Diego Union-Tribune. On Feb. 24, the smuggler and his sister, were indicted by a federal grand jury in Los Angeles on charges of running a massive wildlife trafficking ring. The pair were charged with smuggling roughly 1,700 animals worth around $739,000 into the U.S., including turtles, monitor lizards, iguanas, chameleons and baby crocodiles. Many of the species they smuggled are listed as endangered by the International Union for Conservation of Nature, according to The San Diego Union-Tribune.

Investigators from the U.S. Fish and Wildlife Service and Homeland Security Investigations (HSI) claim that Perez advertised the smuggled animals on several Facebook pages using a fake name. He allegedly made 36 crossings at San Ysidro in the past year, many of which were closely followed by posts he made on Facebook. Most buyers were likely unaware that the animals were illegally imported because they were shipped in FedEx boxes with specialized labels using a company called Reptiles Express, according to The San Diego Union-Tribune.

Investigators say messages from the accused’s phone allegedly show that he also had other smugglers working for him, according to The San Diego Union-Tribune. “Thank God they found nothing,” one suspected smuggler messaged him in 2016. “That is why I always tell you turtles are risky. They are bulky. I got nervous today, but I kept my cool.”

The San Ysidro crossing is the fourth-busiest border crossing in the world, with an average of 70,000 vehicles and 20,000 pedestrians transiting the border there every day, according to the U.S. General Services Administration. As a result, the crossing is a major hub for the illegal wildlife trade. In the past, officers have seized tiger cubs, parrots and fighting cocks, as well as animal products, including fish bladders, turtle eggs, ivory and whale bones, according to The San Diego Union-Tribune.

“We will continue to aggressively investigate individuals who are involved in the unlawful smuggling and trafficking of endangered wildlife for their own financial gain,” Chad Plantz, special agent in charge for HSI in San Diego, said in the statement.