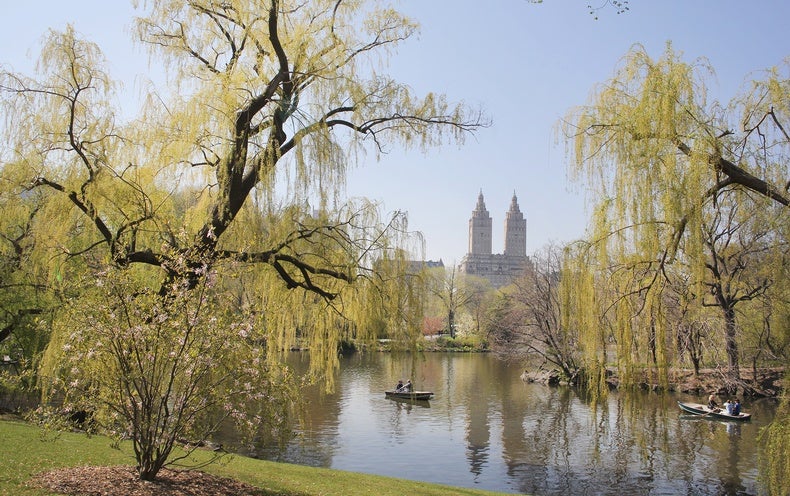 Soon it will gain another title: living laboratory — specifically a research site to study how climate change affects urban parks.

Under a collaboration between the Yale School of the Environment and two New York City-based nonprofits, researchers will monitor, map and analyze changing climate conditions in the 843-acre park to better understand how warming affects trees, plants, wildlife and the tens of thousands of humans who use it every day.

“There are lots of individual studies on parks and climate change, including about how much CO2 trees absorb from the atmosphere and how much urban heat island effect is mitigated by tree canopy,” said Karen Seto, a professor of geography and urbanization science at Yale, who will direct the lab program.

“What we want to do is study Central Park as an ecosystem, as a coupled human-natural system, and we’re looking at it top-down and bottom-up — from soils to satellites,” she said.

The Central Park Conservancy, which manages the park under a contract with the city, will help coordinate the research effort, officials said. It also has the imprimatur of New York’s new mayor, Eric Adams, who said in a press release that the initiative reflects “a new era in research and cooperation that will give our park professionals improved tools to combat the climate crisis.”

“Parks are essential for New Yorkers, as this last couple of years have proven, but flooding, high winds, and extreme temperatures pose a threat to their health,” Adams said.

He was referring to a string of climate disasters New York has faced over the last decade, from Superstorm Sandy’s dismantling much of the city in 2012 to more recent events, such as catastrophic flooding in September from Hurricane Ida.

The city also is experiencing frequent heat waves, including three last year, when temperatures soared to 90 degrees Fahrenheit or higher for three consecutive days. Five of the hottest Julys on record, according to weather stations in Central Park, occurred between 2010 and 2020.

“All of these things are creating a convergence of issues that are maintaining the park and keeping it safe for the public as well as the wildlife living in the park extremely difficult,” Salmaan Khan, director of research and special projects for the Central Park Conservancy, said in an interview.

Among the project’s top priorities will be identifying climate change impacts on park resources using digital mapping technology. Clara Pregitzer, deputy director of conservation science for the New York City-based Natural Areas Conservancy, said those impacts range from heat stress on trees and other vegetation to the effects of extreme conditions on wildlife.

She said the project will draw upon decades of data that has been collected by the Central Park Conservancy on wildlife and other metrics of the park’s natural features, but that to date has not been analyzed.

She said the living lab research approach could provide “an incredible starting point to be able to stratify and understand where there might be hot spots of biodiversity in the park” — as well as areas where climate change has degraded habitats and made the park more vulnerable to climate impacts.

For example, she said, more severe storms and soil saturation from excessive rainfall have compromised the root systems of older park trees, resulting in blow-downs and loss of canopy.

Experts said the research program also will investigate how climate change converges with other human-caused environmental stresses — such as soil compaction and strain on water resources — to degrade both the park’s natural resources and its recreational value.

The lab’s findings will apply broadly, however, and should help other cities identify and mitigate climate impacts on urban greenspace. That research, in turn, can assist city policymakers in developing strategies to adapt their parks to a warming planet.

“With about 55 percent of the world’s population now living in urban areas, urbanization plays an increasingly important role in how we manage and mitigate the impact of global climate change,” Seto said.