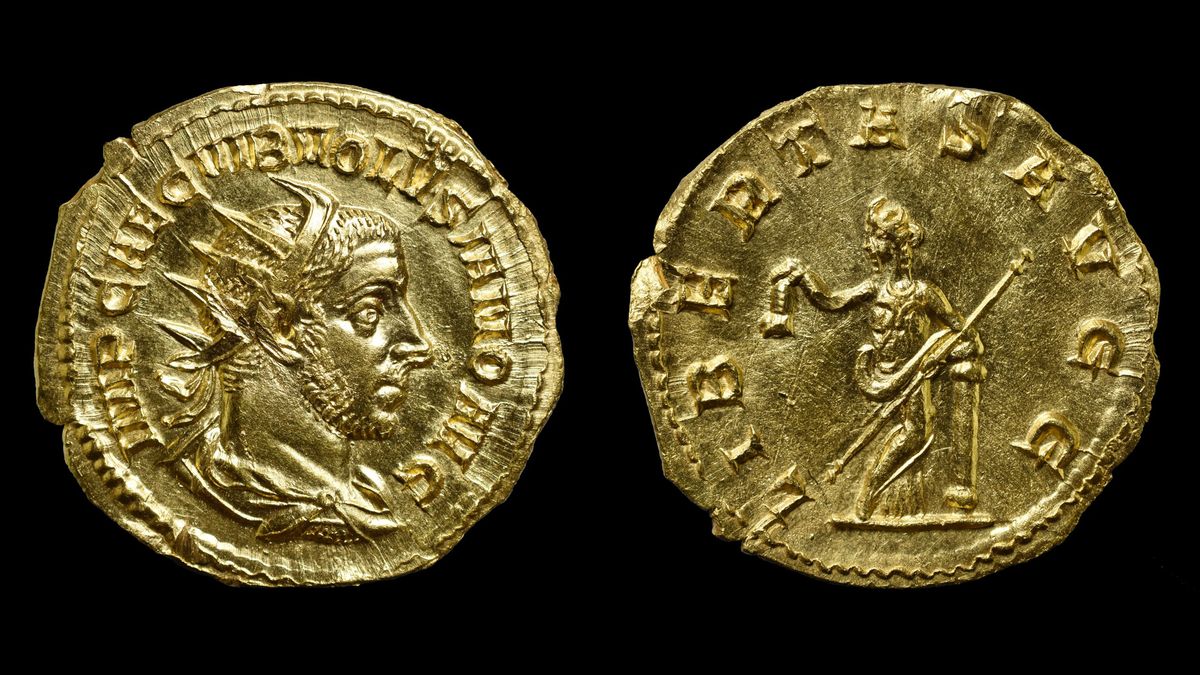 Excavators in Hungary have discovered a “very rare” gold Roman coin that features the face of a murdered Roman emperor.

The third-century coin depicts Emperor Volusianus, who co-ruled the Roman Empire for about two years with his father, until the emperor was assassinated at age 22 by his own soldiers. Because of Volusianus’ short reign, coins bearing his face are rare. What’s more, the coin’s denomination is rare, as is finding gold coins from the Roman period in Hungary, said Máté Varga, an archaeologist at the University of Szeged in Hungary and head of the excavation.

Despite their luck in finding this rare treasure, however, the excavators have no idea who owned the currency. But because it was the only gold coin unearthed at the site, “it is likely a stray that someone lost,” Varga told Live Science in an email. “It must have been a great loss for the former owner to lose this valuable coin.”

The coin was unearthed by a museologist of the Rippl-Rónai Museum in Kaposvár, along with museum volunteers in early 2022. The group was excavating a Roman settlement in Somogy County in southwestern Hungary, but Varga declined to elaborate on the site’s whereabouts.

The excavators found the 0.2-ounce (5.6 grams) gold coin — known as an aureus — during a metal detector survey of the site, Varga noted. The coin was minted during the rule of Volusianus, or between A.D. 251 and 253.

One side of the coin features a portrait of the bearded emperor with a crown of rays on his head, while the other side depicts Libertas, the personification of freedom, Varga said.

This coin wasn’t “small change,” either. “The denomination of the coin is not an ordinary aureus, but a rare binio, i.e. a double aureus,” Marjanko Pilekić, a numismatist and research assistant at the Coin Cabinet of the Schloss Friedenstein Gotha Foundation in Germany who wasn’t involved with the new coin’s discovery, told Live Science in an email. Binio coins were first minted in the Roman Empire in the first century B.C. “This nominal appeared only at the beginning of the third century A.D. … then quickly disappeared again,” Pilekić said.

Archaeological work at the Roman site is ongoing. Based on recovered artifacts, including this coin, it appears that the settlement existed in the third and fourth centuries, when this region was a part of the Roman province of Pannonia Superior, Varga said. Other uncovered artifacts include Roman silver and bronze coins (including one of the third-century emperor Probus), a bronze key, a silver ring with inscriptions and a glass brooch.

The coin is now a part of the Numismatic Collection at the Rippl-Rónai Museum, which previously had only one Roman gold coin, Levente Ábrahám, director of the museum, said in a statement.