Slap another cephalopod on the vampire squid’s family tree 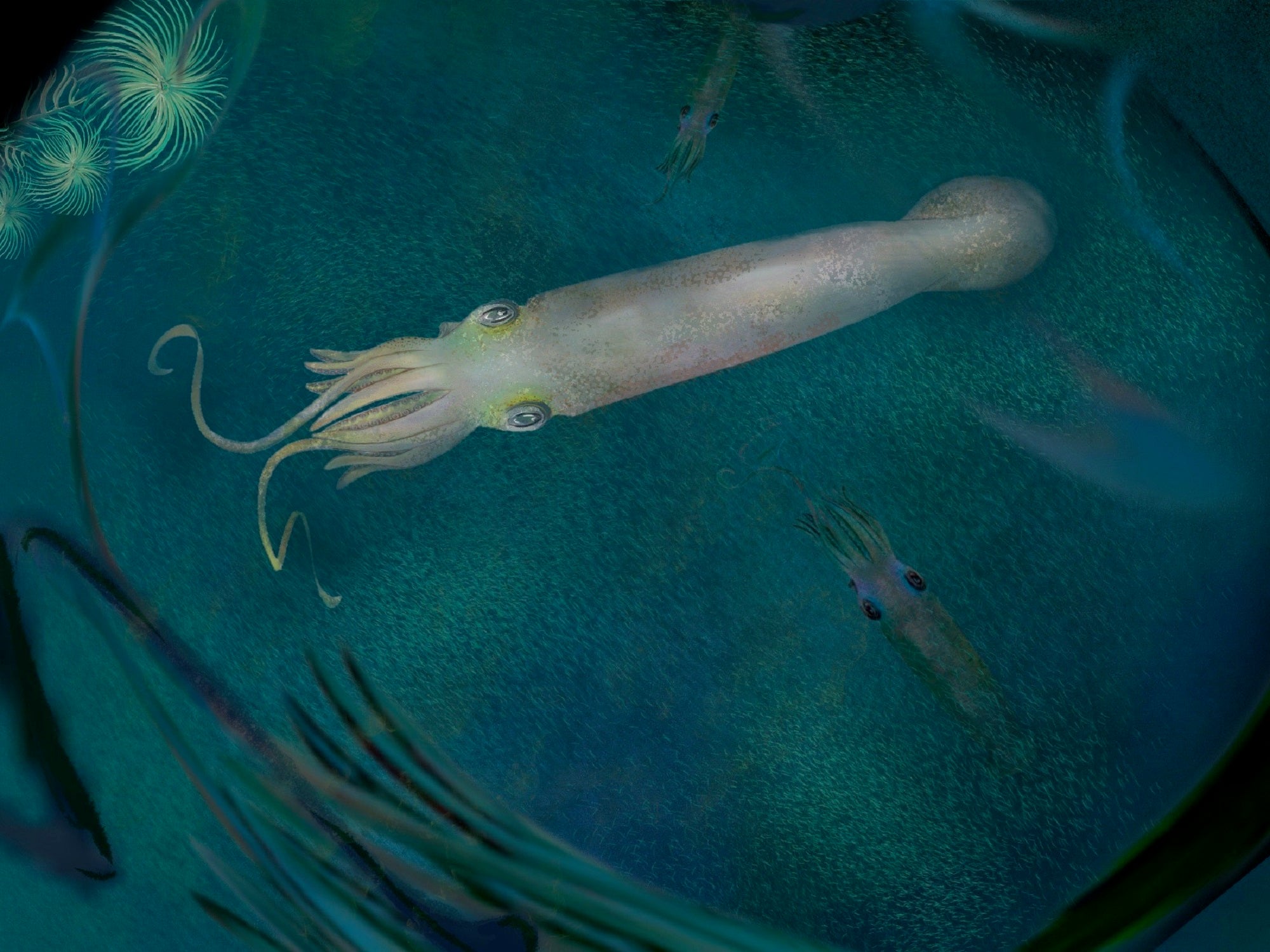 The vampire squid has long carried a reputation for being a nightmarish creature of the deep. When disturbed, this cephalopod is known to wrap its red body with its unique webbed arms, forming a black coat that might startle predators. And with a Latin name that translates to “vampire squid from hell,” it’s difficult to shake off sinister stereotypes. But this phantom creature shares little in common with its villainous name—it’s not a blood sucker, parasite, or predator. In fact, it’s not even a squid: The species is more closely related to octopuses, and has eight arms instead of 10.

“I’ve been saying that it would be better if they were called vampire octopuses instead of vampire squid. It just would have been easier for everyone to keep straight,” says Christopher Whalen, a paleontologist and National Science Foundation postdoctoral fellow at Yale University and the American Museum of Natural History (AMNH). “It has the name it has because for a long time, it was one of these puzzling animals that sort of seemed like it was in between squids and octopuses.”

As cryptic as it is, the creature is a helpful “living fossil,” almost unchanged across millions of years. Researchers have turned to the vampire squid to understand the split between the main groups of cephalopods that exist today. Now, a 328-million-year-old fossil of the squid’s ancient ancestor could help fill in an important link in the evolutionary puzzle.

[Related: 9 creatures that have made spookiness their brand]

In a study published today in the journal Nature Communications, Whalen and AMNH curator Neil Landman describe a new species of the oldest known ancestor of the group vampyropod, which include octopuses and vampire squid. Surprisingly, the ancient animal has 10 arms unlike its living descendants.

The new species, which the authors named Syllipsimopodi bideni as an homage to the current US president, swam around in the Palaeozoic Era. Around 330 million years ago, North America was a tropical climate submerged under a marine bay similar to the Bay of Bengal in India, says Whalen. This former coastal region now comprises central Montana’s Bear Gulch—a limestone outcrop known to have well-preserved fossils. Whalen was studying Bear Gulch nautiloid specimens in the Royal Ontario Museum collections when he came across this particular fossil.

“I noticed that this fossil had the arms and appendages preserved. And that’s very rare to get that type of soft tissue preserved in fossilized cephalopods,” Whalen says. “Then, I looked at it under a microscope, and you can actually see the individual suckers, and that’s even more rare—we’re talking about a handful of fossils that have ever been discovered that have suction cups preserved.”

Chemical analysis and the lack of two anatomical structures confirmed that the cephalopod was indeed a vampyropod—one of two groups of living coleoid cephalopods, or soft-bodied cephalopods with an internal shell. One of the main distinguishing characteristics that separate the groups is the number of appendages: Vampyropoda include eight-tentacled cephalopods such as octopuses and vampire squid, and dechabrachia include 10-tentacled cephalopods like squid and cuttlefish. The researchers think that the loss of one pair of arms might have occurred many eons ago.

“Arm count is the big distinction between the two groups, vampyropods and Dechabrachia,” Whalen explains. “We’ve always thought that eight arms is a derived condition that vampyropods lost somewhere in evolutionary history, but we’ve never had any hard evidence of that.”

The vampire squid, for instance, has two thin filaments that have been thought to be vestigial arms, Whalen says. (Most octopuses have completely lost them.) Other vampyropod fossils have shown these filaments, but they’ve all only had eight arms.

But Syllipsimopodi bideni seemed to have 10 functional appendages instead of eight, which makes it “a bit like a missing link” in the evolutionary chain, Whalen notes.

“This really is the first fossil that we can assign to the vampyropods that has those 10 arms that we always thought were ancestral,” he says. “So this is really vindicating that long-standing hypothesis.”

The fossil, which measures about 12 centimeters long, can easily fit in your hand, leading Whalen to posit that Syllipsimopodi bideni was most likely a smaller predatory cephalopod. Whalen and Landman suspect that Syllipsimopodi bideni used similar hunting strategies to modern squid, with two of its arms slightly more elongated than the other 10. Living squid use two longer tentacles to snatch and reel in prey, and use the shorter tentacles to manipulate their catch as they eat.

“Maybe very early on, the two longer arms were developmentally isolated structures that could be modified independently of the other eight,” says Whalen. “The fact that they’re already isolated at that early stage means it would have been easier evolutionarily for them to then be reduced and lost.”

The body of the ancient vampyropod was narrow and torpedo-like, also reminiscent of today’s squid. Another notable feature of Syllipsimopodi bideni was the presence of the gladius, a chitinous tongue-shaped plate in the muscular mantle of the cephalopod. The gladius, named after the Roman sword, is used as a structural support that the muscles and fins can act against to propel the animal through the water. Today’s vampire squid and real squid have a full gladius, but the structure has been reduced to vestigial “stylets” or small little bars in living octopuses, Whalen says.

[Related: Octopuses change color as they shift between sleep phases]

“As far as lifestyle, one of the very interesting things about this fossil is that in terms of overall profile, and in terms of how robust the gladius is, it superficially resembles squid much more than octopuses,” he explains. “So this is indicating that the earliest relatives of octopuses probably behaved a lot more like living squids living near shores today.”

Whalen adds that finding a fully formed gladius all the way back in the Carboniferous Period not only provides a new perspective on the origin of vampyropods, but has the potential to change the way researchers understand the separation of cephalopods as a whole. The age of Syllipsimopodi bideni’s existence would mean it lived among some of the earliest known coleoids, which would suggest that there was a very rapid divergence soon after the emergence of the group, he says.

He also points out that paleontological studies like these can explain survival trends in cephalopods today. As global fish populations have taken a hit due to warmer waters from climate change, cephalopods seem to be thriving for reasons that are not yet clear. “Cephalopod fisheries are a multibillion dollar industry,” Whalen says. “It would be nice to know how that industry is likely to change in the near future as the climate continues to increase temperatures. And the first step to understanding how any system has changed is to map evolutionary interrelationships.”