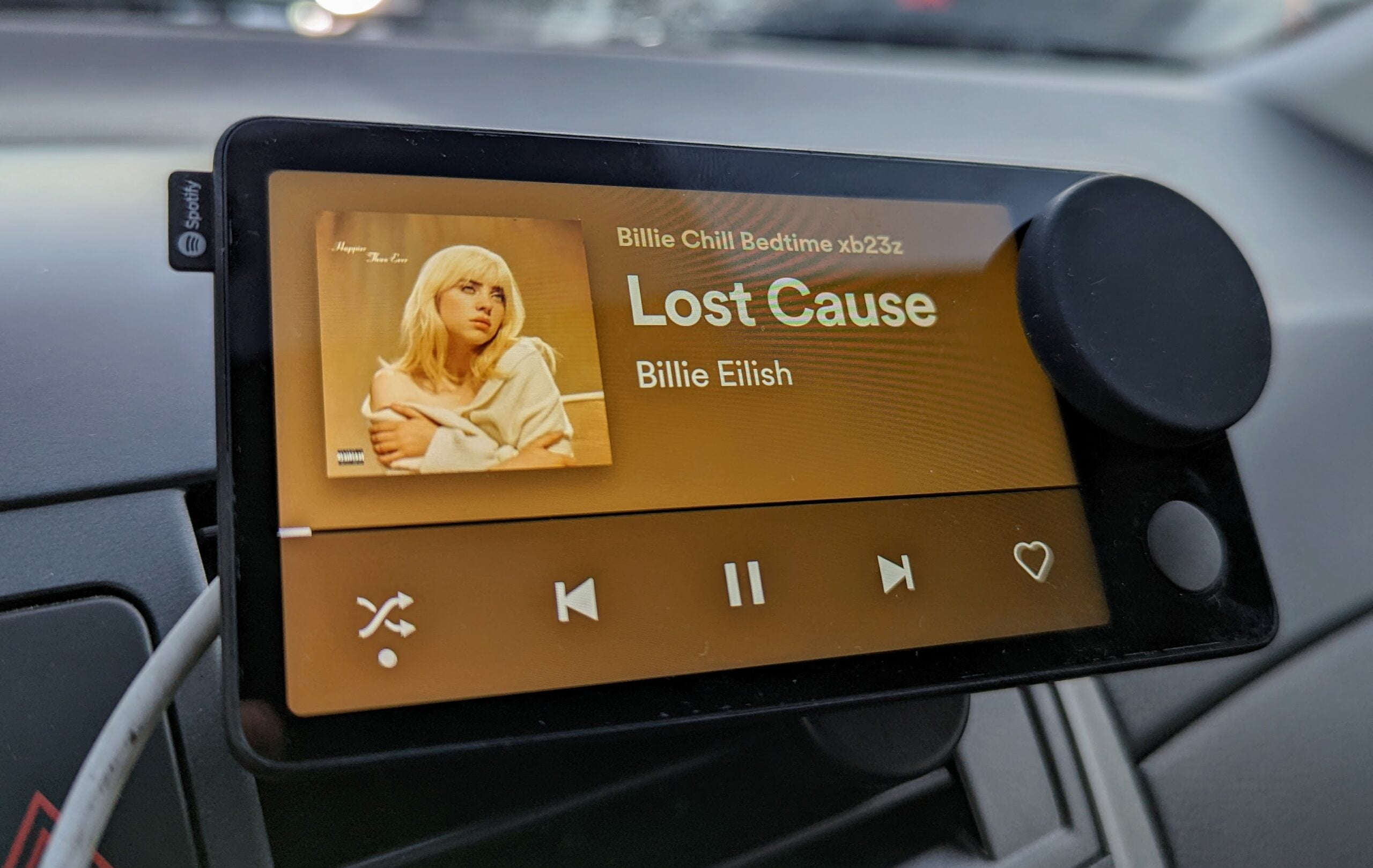 Spotify wants to change the way we interface with music in our cars, letting us keep our hands on the wheel and eyes on the road. The Car Thing—yes, that’s really the name—hopes to turn your car stereo into nothing more than a Bluetooth adapter, putting Spotify front-and-center and becoming the primary interface for music and podcasts in your car, all while keeping your phone in your pocket. Unfortunately, even at a pretty reasonable $79, the slick-looking little device fails to make a strong case for itself, even as a niche car gadget, in a world where powerful smart devices are everywhere.

What is the Spotify Car Thing?

The Spotify Car Thing is a thin, light heads-up display that most closely resembles a dedicated GPS. The charcoal-colored box, matte finish, and large screen give the device a more premium look than the $80 price tag would suggest. The thin screen mounts to your dashboard, vent, or car’s CD player slot, offering a large touchscreen to pick streaming music in your car. It is not, however, a replacement for your car radio: The Car Thing works with Spotify and Spotify alone. There’s no internal storage or user interface that would allow you to download other apps. That alone makes it a niche car audio solution. If you don’t already use Spotify on a daily basis, you don’t need one. Plain and simple.

At 4.5-inches wide by 2.5-inches tall and weighing 3.2 ounces, it feels downright tiny. In addition to the 3.97-inch, 480 x 800 touchscreen, you can also use voice controls and/or a more conventional set of buttons and a front-mounted dial.

The Car Thing mounts to your car’s dash or vent and pulls power via a 12V USB Type-A car adapter (or you can use your own USB car adapter and a USB-C-to-A cable, so long as they draw enough juice). The mount, a small magnetic puck, can either slot into an air conditioning vent or stick onto a flat spot on the dash with an adhesive strip. Having a variety of mounting options is appreciated, but none of them feels completely sturdy: Though most were stable enough to get by, the device wobbled a bit no matter how I mounted it. That said, it looks very nice when placed just right.

The focus is on the touchscreen, though, which will be readily familiar to Spotify users despite being built for the Car Thing specifically. The Car Thing has a custom version of the Spotify app interface that’s bright, clean, and easy to read. It’s as easy to use as the standard Spotify car interface, but some of the hardware customizations we’ll get into below take that up a notch. The screen isn’t as buttery smooth as we’ve come to expect from modern smartphones, but it’s responsive enough for a device you really shouldn’t stare at for too long.

If you want to keep your eyes on the road, you can talk to your Car Thing, too, by saying “Hey Spotify” followed by standard commands like play, stop, and skip. You can also ask it to do things like show your playlist, save an album, or even recommend something using Spotify’s recommendation algorithm. Beyond standard audio device controls, it responds to more vague requests, like “play happy music,” or more specific menu navigation, like “show this artist.” These commands, while useful in some cases, aren’t terribly intuitive. Even Spotify’s own support page offers suggestions, but not an exhaustive list you can reference.

The Car Thing offers a couple of ways to physically interface with it, too. On top of the device are four “preset” buttons that you can set with custom playlists or radio stations, either by holding down the button to change the preset or by using voice commands to have Spotify do it for you. For us picky listeners out there, this is a great feature and one of the places where it feels like the Car Thing separates itself from using a phone directly. You can press any of the preset buttons to change playlists instantly, making it a much shorter trip than if you were to use your phone.

There’s also a dial and a Back button on the front of the Car Thing. The Back button is pretty self-explanatory—pressing it takes you back to the previous screen. The dial can be used as a physical alternative to the touchscreen when browsing music and podcasts and if you’re in the Now Playing view, you can use it to control your Spotify’s volume. That dial, however, has to communicate with your phone, which will then communicate with your audio device. The dial on your car stereo is much more direct and will respond instantly; the dial on the Car Thing is quite laggy by comparison. The dial and button feel nice, though. They’re easy to interact with and feel good to press.

Can I use the Car Thing with a free Spotify account?

As with Spotify’s other non-web applications, the Spotify Car Thing only interfaces with Spotify Premium accounts. For Spotify family plan users, only the primary account holder can use it. Again, this device is really geared toward Spotify users who use it as their primary music streaming service, but it is still a noteworthy issue.

How does the Car Thing do its … thing?

You’ll want to take a seat for this. In your car, specifically.

When you power up the Car Thing for the first time, it shows a QR code for you to scan with your smartphone and initiate the setup process in the Spotify app. The setup process is incredibly easy and it pairs with your phone automatically after the initial setup.

The Car Thing connects to your phone, as it will do every time you use it, and then looks for your car stereo’s Bluetooth connection. The Car Thing wants to control music on your iOS or Android phone and play music through that phone/tablet specifically, rather than through wherever your Spotify account is playing currently (such as your computer, game console, or streaming device). So while you don’t necessarily need a Bluetooth device in your car to use this, the music will come out of your phone one way or another. If you do all of your music listening through your phone even outside the car, you might be able to use it this way, but it didn’t work that way for me.

This dashed my dreams of using the Car Thing with my computer in addition to using it in the car. It syncs up with a single device automatically and isn’t made to switch between different profiles or devices. I managed to connect it to my computer and use it to control Spotify there, but the moment it disconnected, it paired with my phone again. It’s too much effort to pair it every time.

Even in the car, its rigid design creates serious limitations. Phones have many car-related functions beyond playing music in the car, including directions and making hands-free calls. The Spotify Car Thing isn’t equipped to interface with other apps on your phone so that easy interface comes crashing down the moment you need something other than music from your phone, or when someone needs you. So while the touchscreen and voice controls are handy in their limited context, it is a far cry from the in-dash computer systems found in an increasingly large swath of modern cars.

So, who should buy the Spotify Car Thing?

Despite the ubiquity and odd appeal of the “Car Thing” name, only a small group of people will actually find the device useful. If you’re a Spotify Premium user who does a lot of driving, the Car Thing is a great way to help you keep your eyes on the road and minimize time spent fiddling with your phone. If you have an older car that uses a Bluetooth adapter it might also be a good fit, but it feels like an over-engineered solution when a less expensive car mount will let your phone do the same job. For most of us, though, the time spent to plug the Car Thing in and mount it to your dashboard isn’t worth it. While the device is polished, its narrow focus feels like a makeshift solution for people who don’t have access to built-in car-to-phone interfaces. (It would also work great for Uber and Lyft drivers who have Spotify Premium and who want to give their passengers control of the radio.)

For free Spotify users and people who don’t use the service as their primary audio streaming platform, the Car Thing simply doesn’t do nearly enough to warrant deepening your connection to Spotify when there are other devices that enable you to play streaming music from your phone through your car’s speakers. The touchscreen is nice but, ultimately, a luxury. Your money is much better spent on more utilitarian accessories.

Looking for something new to listen to, Spotify fans? Here’s what the staff at Popular Science has been playing recently: