The Devastating Loss of Grandparents among One Million COVID Dead 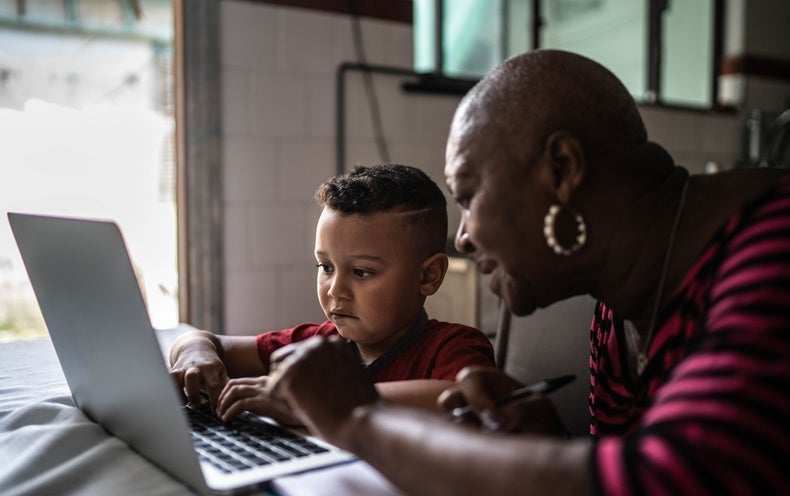 Think of the dead grandparents and everything they’ll miss. All the milestones, the middle school graduations and bar mitzvahs and quinceañeras. All the victories, on soccer fields or piano recital halls. All the ordinary shared moments, dancing to “Baby Beluga,” or making banana bread, building extravagant Lego towers, watching The Wizard of Oz and cuddling at the flying monkeys part.

And the grandchildren, now bereft and sorrowful—think of everything they’ll miss, too. The wide embrace, the rapt attentiveness, the patient rereading of the same Dory Fantasmagory book over and over again. What those grandchildren have lost, two years into a ravaging pandemic that disproportionately kills the elderly, is a precious piece of their birthright: the feeling that they are totally and unconditionally adored, “gleaming with satisfaction at being this very child,” as poet Galway Kinnell once put it. In Kinnell’s poem, it was the parents who made the child feel so cherished, but to my mind, that glow is what grandparents provide best. Not even the most devoted parent has the time to marshal the unmitigated, unfiltered, focused adoration of a doting grandparent.

Scientists have known about the special balm of grandparents for a long time. In the 1980s, the husband-and-wife team of Arthur and Carol Kornhaber looked at 300 grandparent-grandchild pairs in a longitudinal study. Arthur Kornhaber, a child psychiatrist, became interested in the subject after treating a young patient named Billy, who had come to see him because of problems with attention, distractibility and dealing with frustration—symptoms that seemed to ease, Kornhaber learned, when Billy’s grandmother was around. As part of therapy, Kornhaber asked the child to draw a picture of his family and describe what was happening. Billy drew a pyramid with himself on the top, running after a football. His parents were beneath him, “happy because I am a good football player.” And at the bottom were his grandparents, also watching him play, “happy that I am happy.”

That was it in a nutshell: the love Billy felt from his parents was a matter of earning their approval; the love from his grandparents was unconditional.

How many grandparent-sized holes have been created in families like Billy’s today, as the United States faces the staggering one-million mark of deaths due to COVID? Based on that figure, a rough back-of-the-envelope calculation brings up an estimate of more than 614,000 lost grandparents because the great majority of those one million dead (74 percent) were age 65 or older, and the great majority of people in that age group (83 percent) have at least one grandchild.

Among that number were, possibly, some whose deaths brought a modicum of relief. Maybe their lives contained more suffering than joy; maybe infirmity or dementia had upended family dynamics. So let’s set the staggering toll on the American family at about half a million active, involved, essential grandparents, give or take. Half a million elders who could have looked forward to years of acting as family fulcrum, their presence now abruptly truncated and never to be replaced.

The centrality of grandparents to family flourishing is nothing new. Throughout recorded history, involved grandparents, especially grandmothers, have helped promote the survival of their grandchildren, the stabilization of their communities, and even, according to the anthropological theory known as the grandmother hypothesis, the evolution of the species itself. While the very existence of postmenopausal women has been presented as an evolutionary mystery—Why would a species have evolved to spend up to one third of its typical life span unable to reproduce?—the grandmother hypothesis posits that they served an important adaptive role in our species’s early history. Without the distraction of babies of their own, according to this theory, older women in hunter-gatherer societies could focus on the welfare of the youngest generation, providing food and guidance for those children while their daughters were occupied with their next babies. The existence of grandmothers, especially maternal grandmothers, is thought to have helped early humans evolve a longer period of dependency during childhood, which in turn led to the development of a larger brain, a prolonged learning period and a more complex social life. And when having long-lived women in the family helped the youngest generation survive to reproductive age, Grandma was passing along her genes for longevity at the same time, thereby extending human life expectancy overall.

Today’s grandparents help out in more modern ways. They support their children’s careers by providing high-quality, loving (and generally free) childcare; step in to raise their grandchildren when illness, drug abuse, divorce or a string of bad luck render their adult children unable to cope; and mount political action to make the world better for the youngest generation.

Grandparents’ help with childcare has a clear effect on young families: mothers of young children are up to 10 percent more likely to have paying jobs if a mother or mother-in-law lives nearby. Grandparents help out with finances more directly, too; 96 percent of American grandparents, according to AARP, give their adult children some form of financial assistance, most often for help with education (53 percent) or everyday living expenses (37 percent).

In my own family, I like to think the help my husband and I have given our daughter and son-in-law has made the difference between managing and thriving as they raise their two little girls. COVID undid that benefit for a while. When the pandemic first hit, we—feeling especially vulnerable to COVID by virtue of being in our late 60s—were able to isolate in our privileged white cocoon. But it felt awful not to be able to help our daughter and son-in-law just when they most needed help—as they juggled full-time jobs with full-time daycare for their girls, then aged almost two and almost five. It was agony to be reduced to pixels after having been a regular feature of the girls’ lives—including Thursday daycare pickups, regular weekend visits and three or four weeks spent together at the beach every summer.

Then a good friend from high school died after a stroke that might or might not have been related to COVID—this man, the same age as I was, died alone in a Manhattan hospital right down the street from me because his loved ones were kept from visiting—and the possibility of disappearing entirely from our granddaughters’ lives became real. Every plan we’d ever made about future get-togethers with the grandkids seemed, on reflection, stupid and audacious. We could die from this.

So our Zooms with the girls, as imperfect as they were, suddenly felt precious—and felt like a way of helping out, in a way, as part of the home-school routine our daughter cobbled together. Every morning at 9 A.M., my husband and I were responsible for remote “circle time.” I tried not to notice how awkward it was to have a tea party through those infernal screens. I tried not to think about whether the girls felt abandoned or whether they wondered why we’d stopped showing up. I tried not to notice when the younger one started crying and calling our names as we clicked the “leave meeting” button.

We were lucky; we all got vaccinated as soon as we could, even our older granddaughter, and all the adults got boosted. The little one, now almost four, caught COVID during the Omicron wave, but she got through it with only a slight fever and didn’t pass it to the rest of us.

A million people were not so lucky, and their grieving families are still dealing with the enormity of the loss.