The Most Notorious Pirates Ever 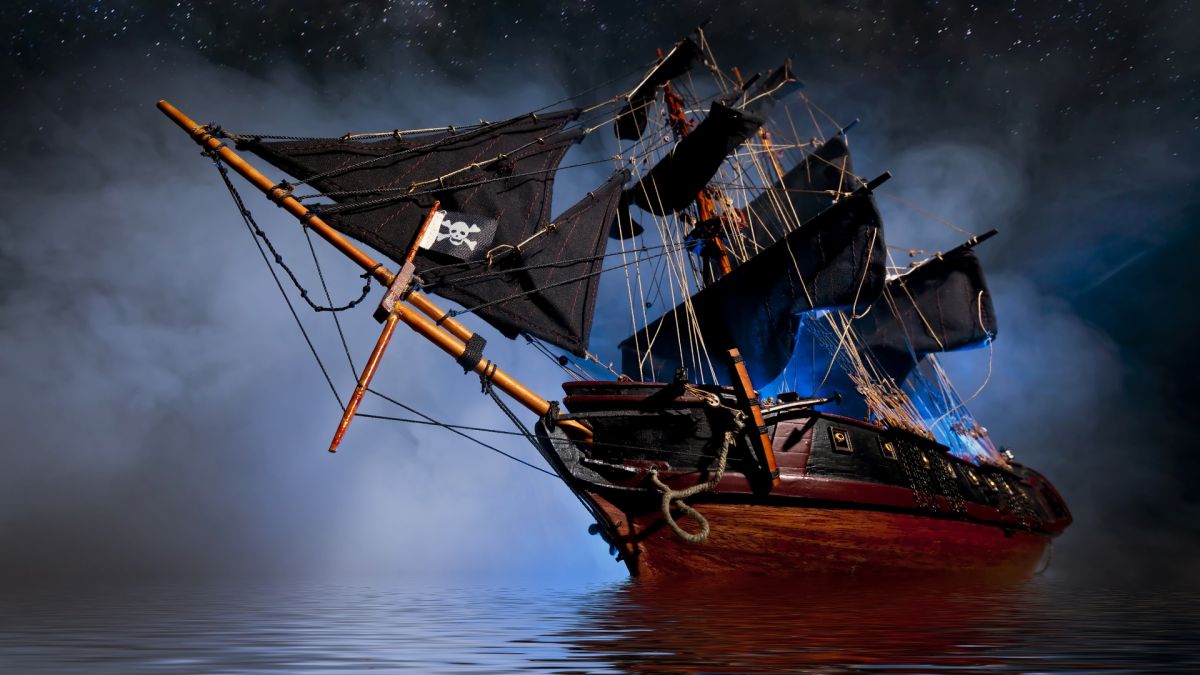 History is filled with notorious pirates that terrorized the seven seas. The exploits of these ship plunderers remain famous to this day, but they were very different from the friendly pirates seen in the “Pirates of the Caribbean” movie franchise and other films.

Many of history’s most famous pirates began as privateers — state-sanctioned sailors for hire who attacked their countries’ enemies at sea and harassed commercial ships in designated zones. But those being plundered saw those guns for hire as pirates. Others who started out in state-sanctioned work became pirates when the lure of gold was too great, and they struck out under their own flag to illegally raid rich merchant vessels.

Some pirates were so successful that they became feared by sailors around the world. Here are eight of the most notorious pirates in history.

Blackbeard is probably the best-known pirate in history, even though his life is shrouded in mystery. Much of what we know about him and other pirates of his time comes from a 1724 book, published under the name Capt. Charles Johnson, called “A General History of the Pyrates“. Charles Johnson is a pseudonym, not the author’s real name, and the book is often attributed to author Daniel Defoe, who wrote famous novels such as “Robinson Crusoe.” However, nobody is sure who wrote it, according to Smithsonian Magazine. Some of the book is backed up by government documents of the time while scholars have proven other parts to be false, so it isn’t an entirely reliable source.

The book says Blackbeard was born in Bristol, England, under the name Edward Thatch, and served as a privateer during the War of the Spanish Succession (1701 to 1714). In 1716, he turned to pirating in the Caribbean Sea and off the coasts of South Carolina and Virginia in his ship, named “Queen Anne’s Revenge.” He earned a fearsome reputation in these regions, which, according to historian and journalist Colin Woodard, Blackbeard used to his advantage. “He did his best to cultivate a terrifying image and reputation, which encouraged his foes to surrender without a fight,” Woodard previously told All About History magazine.

Thatch’s huge beard “came up to his eyes,” and while in action, he carried “three brace of pistols, hanging in holsters like Bandoliers; and stuck lighted matches under his hat,” in order to cloud himself in an ominous haze of smoke, according to the 1724 account. Blackbeard was killed in November 1718 after his ship was ambushed by Royal Navy officers near Ocracoke Island in North Carolina, according to the National Park Service.

One of the most successful pirates in history was a woman named Ching Shih, sometimes called Cheng I Sao or Zheng Yi Sao. Born into poverty as Shih Yang in Guangzhou, China, in the late 18th century, Shih was a sex worker until she married a pirate named Ching I in 1801 and took the name Ching Shih, which meant “the wife of Ching,” according to a case study by the University of Oxford’s Global History of Capitalism project.

The pair began consolidating control of the region’s rival pirate gangs into a confederation, according to a 1981 article in the journal Historical Reflections by Dian Murray. Ching died in 1807 and widow Shih seized sole control of the pirate confederation. According to Murray, Shih secured control of the pirates through careful alliances and a strict code of laws. “The code was severe. Anyone caught giving commands on his own or disobeying those of a superior was immediately decapitated,” Murray wrote.

At the height of her power, Shih, also called the “Pirate Queen,” controlled a fleet of 1,200 ships crewed by about 70,000 pirates. Shih broke up the confederation in 1810 and negotiated a generous surrender deal with the Chinese government. Not only were the pirates pardoned for their crimes, but some were allowed to keep their vessels and joined the Chinese army. Some even took positions in the government, according to Murray.

Sir Francis Drake was a noble to some and an outlaw pirate to others. Born in Devon, England, around 1540, Drake became the first Englishman to circumnavigate the globe as a sailor, according to the BBC. But this feat was not a planned exploration but rather a byproduct of his goal to raid Spanish ships.

The robbing of Spanish ships was legitimate from an English perspective, but to the Spanish, Drake was a menacing pirate they nicknamed “El Draque,” according to an article on the University of Plymouth website by Elaine Murphy, an associate professor of maritime and naval history at the university in England. Drake brought back plenty of treasure from his circumnavigation and shared his riches with Queen Elizabeth I, by whom he was knighted. He was also a leading naval commander who fought against the Spanish Armada, a fleet of Spanish ships that attempted to overthrow the queen in 1588.

Drake’s legacy is further muddied by his involvement in slavery. He helped start the English slave trade in Africa by making multiple trips to Guinea and Sierra Leone with his cousin and naval commander Sir John Hawkins and enslaved up to 1,400 African people, according to Murphy. Drake died of dysentery off the coast of Panama in 1596.

Samuel Bellamy may have lived to only 28 years old, but he made a name for himself during that short life. Likely born in Devon at the end of the 17th century, Bellamy began working on the high seas at the beginning of the War of the Spanish Succession when he was 13 years old and later became a pirate captain, according to the New England Historical Society.

As a pirate, Bellamy captured 53 ships, including the Whydah Gally, a slave ship carrying a fortune in gold, silver and other goods. The Whydah Gally left England in 1716 and took 312 enslaved people from the west coast of Africa to Jamaica. Bellamy captured the ship as it returned to England, by then emptied of slaves and filled with profits, according to the Field Museum in Chicago.

He was likely the highest-earning pirate of all time, Forbes reported in 2008. Forbes estimated that all the booty he took would have been worth about $120 million in 2008 dollars. Bellamy made the Whydah Gally his flagship in 1717, but he went down with it in a storm that same year.

His nickname was “Black Sam” Bellamy because he wore black wigs tied back with a black bow. Bellamy also styled himself as the “Robin Hood of the Sea” by stealing from the wealthy. According to the New England Historical Society, he ran his ship democratically, treated his crew members as equals and spared the lives of captives.

Bartholomew Roberts, nicknamed “Black Bart,” was a tall, handsome and flamboyantly dressed 18th-century pirate from Wales. He initially worked on merchant ships but swapped trades to become a pirate and was soon elected captain of his own ship and crew, according to the Royal Museums Greenwich in London.

Roberts took upward of 400 ships during his life, including in the Caribbean and off the coast of Africa. He often took slave ships and then demanded gold from their captains in exchange for their return. When one such slave captain refused, Roberts reportedly burned their ship with 80 slaves trapped on board, according to the World History Encyclopedia.

Black Bart’s crimes came to an end in 1722, when he was killed by the British Royal Navy off the coast of Gabon in West Central Africa while his crew members were too drunk to defend the ship, According to the Royal Museums Greenwich. A total of 52 members of his crew were then hanged in the largest pirate trial ever held, according to the Smithsonian’s National Museum of Natural History in Washington, D.C.

Scottish sailor William Kidd, or Captain Kidd, is famous for walking the blurry line between privateer and free agent. Born in Scotland around 1645, Kidd was employed as a privateer by the British government in 1689 and even commissioned to arrest pirates. However, he was ultimately hanged in London in 1701 for murder and piracy himself, according to Britannica.

Kidd famously captured a merchant ship, the Quedagh Merchant, off the west coast of India in 1698. The ship was filled with gold, silver, valuable silks and satins, and other Indian merchandise. Learning he’d been branded a pirate, Kidd left the ship in the Caribbean in 1699, traveled to New York to clear his name and was captured. Historians disagree on whether he was actually guilty of piracy. The wreckage of the Quedagh Merchant was discovered in 2007, Live Science previously reported.

Anne Bonny (or Bonney) and Mary Read were two famous female pirates as menacing as their male counterparts, if not more so. The daughter of a plantation owner, Bonny was born in Ireland in 1698 before moving to South Carolina, according to the Royal Museums Greenwich. Anne left her life behind for the Caribbean in the early 1700s and hit the open ocean. She started pirating disguised as a man on the ship of Calico Jack Rackham, a pardoned buccaneer. Read, born in London, joined the crew, also dressed as a man, when the ship she was working on was captured by Rackham.

Bonny and Read became friends, pillaging together on the high seas. They sported jackets and long trousers, and fought with a machete in one hand and a pistol in the other. A victim of their piracy testified that they were very active on the ship and “wiling to do any thing,” according to Smithsonian Magazine. Rackham’s ship and crew were captured off Jamaica in 1720 and put on trial, but Bonny and Read avoided the gallows because they were both pregnant. Read died in prison with a fever, while Bonny survived. Her father secured her release from prison and brought her back to South Carolina, where she lived until age 84.

Learn more about the real Caribbean pirates by reading Colin Woodard’s “The Republic of Pirates: Being the True and Surprising Story of the Caribbean Pirates and the Man Who Brought Them Down” (Mariner Books, 2008). You can also listen to a short audio series about historical pirates called “The Truth About Pirates,” by Royal Museums Greenwich, on SoundCloud. For more information on the discovery of Captain Kidd’s ship, the Quedagh Merchant, check out the Indiana University website.

Captain Charles Johnson (pseudonym), “A General History of the Pyrates,” 1724.

Global History of Capitalism project, University of Oxford, “Ching Shih and the Pirates of the South China Coast: Shifting Alliances, Strategy, and Reputational Racketeering at the Start of the 19th Century,” Feb. 2021. https://globalcapitalism.history.ox.ac.uk/files/case20-chinesepiratespdf