These Russian military robots help with logistics and scouting 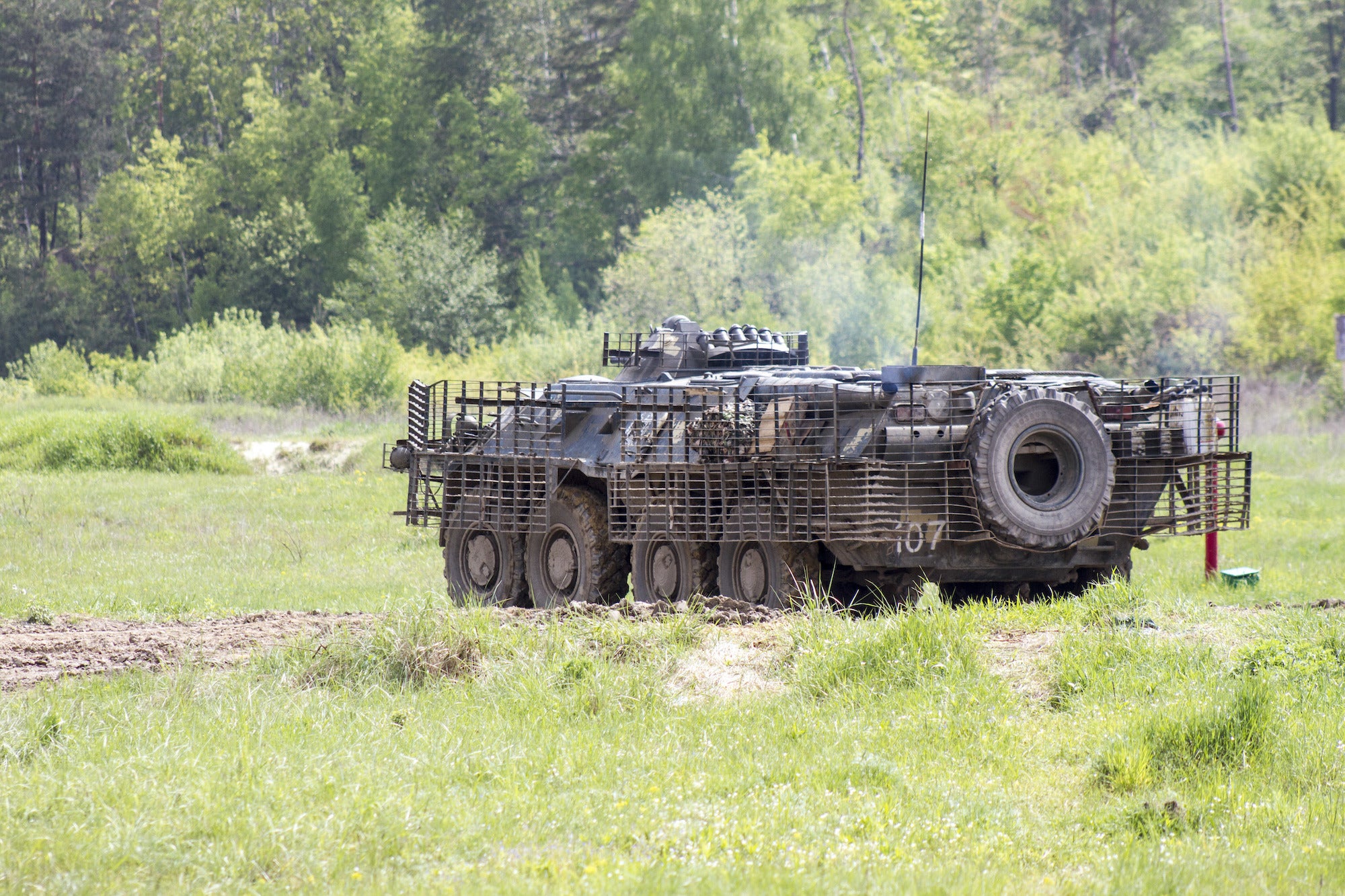 At Russia’s Alabino training ground, about 30 miles southwest of the center of Moscow, soldiers practiced for war in the cold with new robots. In temperatures reportedly as low as -13 degrees Fahrenheit, the Russian military experimented with both a “scout-kamikaze” and “logistics” robot. Russian state-owned media company Zvezda released a video of these tests on January 23.

The tests were conducted by the Ministry of Defence’s Main Directorate of Armored Forces Combat Training.

In the video, the two robots are visible. A small tank-shaped scout advances ahead of a large six-wheeled armored personnel carrier. Behind the large crewed vehicle rolls the tracked logistics robot, also in the same drab military green, and about waist height against the soldiers in all-white standing nearby.

It’s not clear how to refer to these bots at the current time. “Neither Uncrewed Ground Vehicle has an official name or designation yet,” says Samuel Bendett, an analyst at the Center for Naval Analysis and adjunct senior fellow at the Center for New American Security. “Both are in line with the Ministry of Defence’s earlier statements that autonomous, unmanned systems and military robots will ultimately replace soldiers in most dangerous battlefield tasks, thereby helping save lives and make missions more effective.”

In the exercise, the logistics robot has the most obvious use, roughly analogous to an American Marine EMAV robot outfitted for cargo. In its open back rests many clips for the AK-12 rifles used by the soldiers. After the soldiers empty their magazines from firing, they retreat to the robot, dumping empties and picking up fresh magazines to load into their rifles. The flat back of the robot shows about 20 magazines in a single layer, with the depth to accommodate at least 5 layers of magazines, or roughly 3,000 bullets in their most immediately useful form.

[Related: Meet the ‘Spy Stone,’ a Russian robot disguised as a rock]

The empties and full magazines are shown loose in the same layer, a situation that’s fine for a test exercise but would likely be disastrous in battle, as a soldier risks trying to reload and grabbing a spent magazine instead. Racks to hold the magazines in place, so that they don’t get jostled out of the vehicle or accidentally discharge a bullet, would likely be a good idea.

Even with the obvious limitations of the rudimentary demonstration, the helpful nature of a follow-along cargo robot is obvious. A shared resource can be distributed as needed in combat, the soldiers’ loads are lighter, and it reduces the steps from going inside an armored vehicle to resupply.

“The logistics UGV is built to supply ammunition to the front lines, deliver medicines and evacuate the wounded,” says Bendett, “with AI elements allegedly allowing the vehicle to independently navigate the terrain, avoid obstacles, and be relatively independent in operation once the final decisions are approved by a human operator.”

Both logistics and scout robots support what appears to be a spinning lidar sensor, with additional cameras to perceive the world around the machine. The smaller scout, seen driving ahead of the formation, has a camera in a glass enclosure, likely keeping the electronics warm and insulated from the elements outside. It also appears to carry a commercial camera, in a GoPro-esque casing and configuration, on the outside of the vehicle.

[Related: Russia’s Marker robot is a testbed for its next-gen military tech]

The smaller robot, roving ahead of the formation in the video, appears to be the scout with the explosive payload.

“The intelligence, surveillance, and reconnaissance robot is reinforced with armor plates and is capable of performing ‘kamikaze’ functions to destroy mines, targets and obstacles via self-detonation,” says Bendett, though the exact nature of the explosive power is unknown.

Many loitering munitions, or drone-like missiles, are built for quick flying attacks against enemies in difficult to reach places. Putting explosives on a tracked robot limits the speed and reach of the machine relative to flying weapons, but it’s also proved effective on its own for decades. Famously, Germany used remotely controlled tracked explosives in World War II.

Both of the little Russian robots bristle with antennas, allowing human operators to control them through either satellite or cellular channels.

As robots are still in the very early stages of development, it is unlikely they will factor into ongoing or new conflicts. What they show, instead, is the greater emphasis on integrating useful robots into a broad range of military tasks. A tracked scout that can explode gives commanders the option to look for enemies in dense cover, urban settings, or places difficult for a flying machine to reach, and then possibly kill what it finds. A tracked resupply robot, marching along soldiers on patrol or advancing in hostile territory, lets soldiers focus more of their attention and effort on finding enemies, instead of managing heavy backpacks.

Taken together, these are two small robots with a lot to say about the bigger implications of how Russia is planning for the wars of the 2020s and 2030s.

Watch the video, in Russian by Zvezda, below: