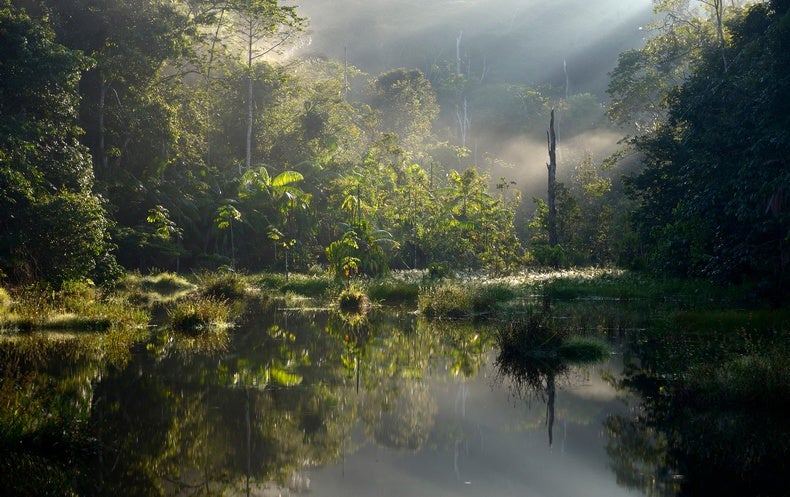 The world’s forests may hold more secrets than previously thought: a new global estimate of tree biodiversity suggests that there are about 9,200 tree species yet to be discovered. Most of these species are likely in the tropics, according to the new research, which was published on Monday in Proceedings of the National Academy of Sciences USA.

Though trees are hard to miss, they are also hard to quantify. They are not even always easy to identify. “Their crowns are hundreds of feet up; they’re in between other things; they look like similar [species],” says Miles Silman, a conservation biologist at Wake Forest University, who was not involved in the new study. “It’s a rare breed of person that sits out in the wild for months on end and looks at every single tree.”

The new research drew on the efforts of hundreds among that rare breed from around the world. These contributors have cataloged trees in two huge data sets: One, the Global Forest Biodiversity Initiative, records every species found in extensively documented forest plots around the globe. The other, TREECHANGE, compiles sightings of individual species.

The study’s authors used these databases to calculate that there are approximately 64,100 known tree species on the planet—up from previous estimates of around 60,000. South America has the highest tree biodiversity, representing 43 percent of species, the team found, followed by Eurasia, with 22 percent, Africa, with 16 percent, North America, with 15 percent, and Oceania, with 11 percent.

To arrive at their estimate of 9,200 still unknown trees, the researchers extrapolated from the number of rare trees already in the databases They used this strategy because most unknown trees on the earth are likely to be rare species, found in limited numbers in small geographical areas, says study co-author and Purdue University quantitative forest ecologist Jingjing Liang.

The team’s result is “a rather conservative estimate,” Liang says, because scientists know less about the preponderance of rare trees in places such as the Amazon—where unexplored spots could host pockets of unusual species found nowhere else. “If we can focus the resources, the forest inventory expertise and money, on those rain forests in the Amazon and Borneo, then we would be able to estimate it with higher confidence.”

Silman says the study result is likely an underestimate. He and his colleagues have used local survey-based methods to estimate that there are at least 3,000 and possibly more than 6,000 unknown trees in the Amazon basin alone. Tree species often get lumped together based on appearance, he adds, so new genetic analysis techniques will likely lead to the discovery of even more biodiversity.

Drew Kerkhoff, a biologist at Kenyon College, who was not involved in the study, wonders how many of such unknown trees will go extinct before scientists describe them. “Conversely,” he says, “how many are already known to Indigenous peoples in the Amazon or Congo basins or were known to peoples or cultures who have themselves now been rendered extinct through colonization, disease, genocide or assimilation? How many already have dried samples sitting in an herbarium cabinet?”

Searching for the new species will inform not only conservation but the basic evolutionary science of how and why species diversify and die out, Kerkhoff says. “Just the fact that there are thousands of species of something as common as trees out there that are still left to be discovered,” he adds, “I find pretty inspirational.”