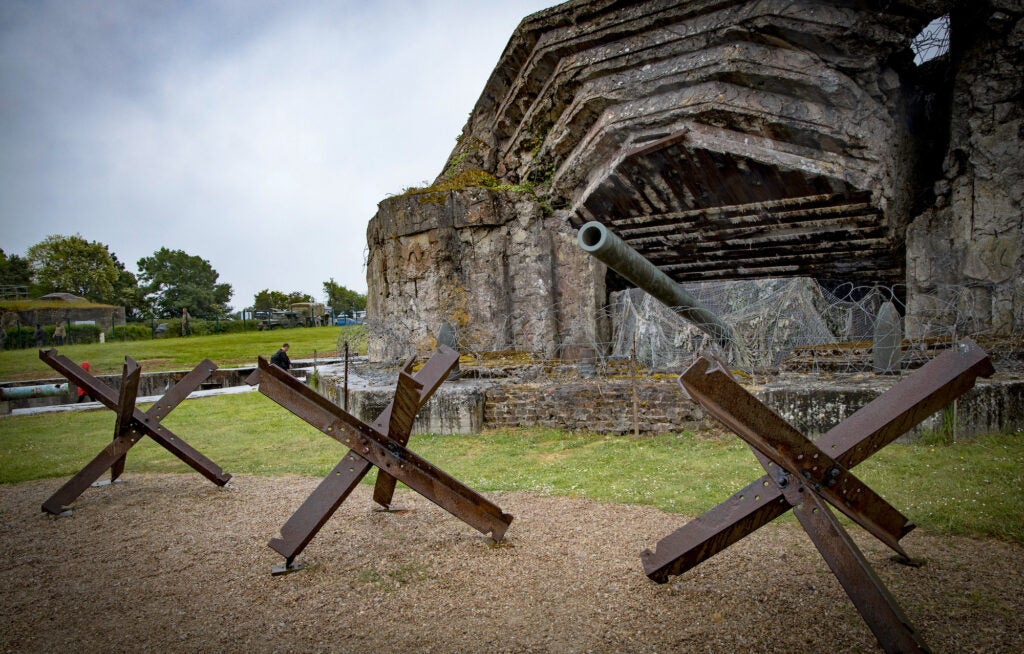 When Russia launched its war on Ukraine on February 24, it did so with missiles and helicopters. Not far beyond, stretching for miles, was the slower work of armored vehicles. Tanks and artillery, brought to staging areas near the border over several months, rolled into Ukraine. With them the war moved from an attack to an invasion, and some people in Ukraine set to work building defenses against the advancing army.

In Lviv in western Ukraine, locals started assembling anti-tank metal barriers, Agence France-Presse reported. The form, which looks like a child’s toy jack made out of steel I-beams, is known as a “steel hedgehog.” Early versions of this obstacle date back to defensive fortifications built in Czechoslovakia in the 1930s. Some of these Czech fortifications may even have been repurposed by the occupying German forces as barriers on the Normandy beaches before D-Day. It is this use that lends the obstacle the name “Czech Hedgehog,” which is how the Ukrainians that AFP interviewed in Lviv referred to what they were creating.

A US Army Engineer School correspondence course on fortifications describes steel hedgehogs as “relatively lightweight for the obstacle effect they provide, and they are quickly installed or removed. They are designed to revolve under wheeled vehicles and puncture them or to belly up tracked vehicles. Unless kept under observation and covered with fire, the enemy can readily move them aside.”

The last line is key: Steel hedgehogs are an especially minor obstacle if they are not actively defended, as they can be lifted, towed, or even rolled out of place, opening a path. If, however, the steel hedgehog row is defended by soldiers, it can add extra protection to infantry, and reduce one of the main advantages of armor.

[Related: The tanks, rockets, and other weapons that Russia has in its arsenal]

Tanks, along with other heavier vehicles like armored personnel carriers, are at their most effective when they have the freedom to move. A turreted gun is a powerful weapon, and in open environments like plains, soldiers on foot are at a huge disadvantage against vehicles.

Move into any kind of denser terrain, and tanks have less freedom to operate. Trenches, fighting in forests, narrow roads through marshes, and any fighting in cities all compound the circumstances where a tank might struggle in combat. Given the choice to fight through a path with hedgehog obstacles in it or go around, tanks with an ability to reroute will likely do so.

Should they drive forward, they risk driving onto one of the hedgehogs. When a tank does drive over a hedgehog, the obstacle rolls under the tracks and lodges in the vehicle, lifting the tank in the air. If a tank does get stuck on such a trap, it’s a sitting target until it can be towed away, and its crew would be faced with the choice to evacuate under fire or sit and hope no one with anti-tank weapons finds them.

In the years between World War I and World War II, as militaries experimented with a range of approaches to tank design, military engineers similarly set to work on designing tank obstacles. In October 1936, a Popular Science illustration of France’s Maginot Line fortification showed steel rails sunk vertically into the ground as an anti-tank barrier. A May 1938 Popular Science story declared that the British military had found success using coils of wire and up-ended steel rails as obstacles, though that report also notes these barriers were secured by “antitank guns firing armor-piercing shells.”

Once WWII broke out, militaries adopted new approaches to stop tanks and overcome battlefields. At Fort Belvoir in Virginia in 1942, Popular Science reported on the work of Army Engineers devising new tank obstacles, and the tank drivers with the Virginia National Guard who repeatedly drove tanks into those barriers to see if they worked.

Likely drawing on this experience, a 1943 Army Engineer Field Manual outlines the use of ditches, fallen logs, and posts as ways to disable tanks. “Abatis,” or felling trees on a road to prevent enemy advances, is such a durable tactic that NATO forces released a video explainer about the method, made at a training exercise conducted in Lithuania in 2016. In 1943, the same year the Army was teaching ditches and abatis, Popular Science included hedgehog-like “jacks” as one of several types of barriers used to stop tanks, alongside cement “dragon’s teeth” and pyramidal tetrahedrons.

[Related: These are the weapons in the Ukrainian arsenal]

Steel hedgehogs have endured as an anti-tank tool in wars in part because their strength is due to their geometry. While other barriers can be blasted apart at a distance, removing hedgehogs requires being up close. Even with dedicated vehicles to clear the path, the existence of a hedgehog barrier suggests that lurking nearby are other soldiers with guns and anti-tank missiles, ready to kill enemies as they approach. Artillery supporting tanks is one grim answer to this tactical challenge, which can destroy the hiding places of defenders in urban areas, and at the same time threatens the lives of any civilians still living in a neighborhood turned into a battlefield.

It is in preparation for future urban battles that these barriers are mostly built. Deployed in Ukraine, the hedgehogs have created surreal images of modern warfare. One of the most striking is that of a Tesla electric car, stopped behind a line of steel hedgehogs in Kyiv.