What I wish I knew before playing Minecraft with my kids 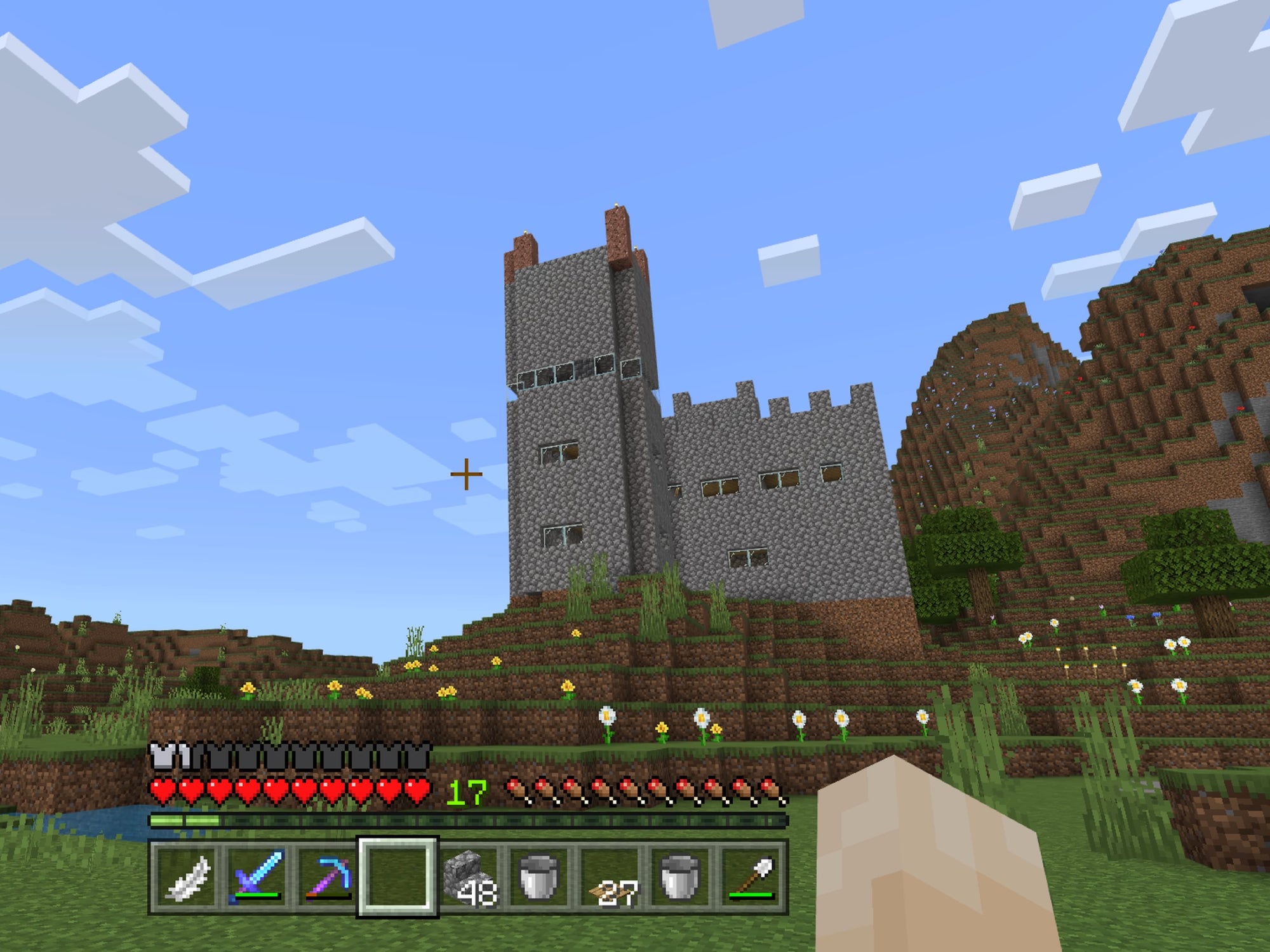 Minecraft is more than a decade old, but its popularity hasn’t waned. A whole new generation of kids is discovering this versatile game, and it’s easy to see why: There are so many different ways to play.

This also makes it a great family game. If you’re looking to hack and slash monsters like me, you can. If you want to build intricate structures like my kids (or watch me build while they direct), you can. And if you like mining for resources and making a garden like my wife, you can.

That said, Minecraft can be overwhelming for anyone just starting out, adults and kids alike. There are a lot of moving pieces and no real in-game tutorial, so you have to figure everything out for yourself. Here are some tips I wish I’d known when I was getting started.

Pick the right mode for your family

There are three primary modes in Minecraft: creative, peaceful survival, and survival with monsters (which can be set to easy, medium, or hard). They each offer unique ways to play. In peaceful survival, you’ll load into a Minecraft world and be able to explore and build as much as you want. You’ll have to find resources, discover areas, and watch out for hazards like lava, drowning, and falling to your death. However, there are no monsters to fight. If you choose to include monsters, you’ll explore and build like you would in peaceful mode, but you’ll have to eat food to fend off starvation and you can be killed by skeletons, spiders, and other creeps. The three difficulty levels determine how much damage these creatures can do.

My kids like exploring but are young enough that the monsters scare them, so most of our family play time has been in peaceful mode. However, once the kids go to bed, I head into the settings and enable monsters, because what’s the point of video games if you don’t get to kill zombies?

If you’re not interested in monsters, exploring, or mining, take a look at creative mode. There, you just build. Whatever you can imagine, you can create. This could be a massive castle, a replica of the starship Enterprise, or even a fully functional computer. Oh, and you can fly too.

You can play any of these modes with anyone connected to a local area network (LAN) like your home WiFi, or join friends or strangers online by entering or setting up a server.

Use the internet to help you craft

It’s right there in the name: “mine” followed by “craft.” Everything you do in Minecraft stems from mining raw materials and then crafting them into something new. Early in the game, you’ll mine trees (with your fist, inexplicably), and then convert that wood into planks, a crafting table, sticks, and a wooden sword, axe, and pickaxe. As you gather more materials, you’ll move up to stone, iron, and eventually diamond equipment, while learning how to create enchantments and potions.

The full crafting tree in Minecraft is expansive and all-but impossible for a casual player to memorize. Fortunately, we have the internet.  Keep your phone handy to look up how to make whatever you need. This crafting guide can help you get started, and there’s no shortage of helpful content on YouTube.

Build a bed, torches, and a shelter on the first day

Making it through your first night in survival Minecraft isn’t easy. I tried to fight my way through the first two nights of my first game and died to swarms of enemies both times. The easiest way to survive is to sleep the night away in a bed placed within a secure shelter with torches inside and out. To do this, you’ll need to acquire three things: wood, wool, and coal.

[Related: Stressed out? Video games can help—if you follow these tips.]

Find wool by killing sheep. They’re common, so finding the three you need shouldn’t take long. Once you have your wool, start mining for coal with your pickaxe. Coal looks like regular gray stone with large black flecks in it. You may not even have to dig—you can often see it in cliffs.

Once you have wood, wool, and coal, craft torches, a bed, and a door.  Then dig a small cave into the side of the closest mountain. Install the door, place the bed, and hang torches inside and out to keep monsters from spawning nearby. Then go to sleep in your bed until morning. Doing this for a few nights in a row will give you a chance to gather enough resources for the weapons and armor you’ll need for the more intense overnight and cave-diving fights later in the game. And once you’re familiar enough with the day-night cycle, you can place your bed almost anywhere and quickly go to sleep before any monsters spawn. But that does, admittedly, break the immersion a little bit.

Learn how to fight

If you have monsters enabled, you’ll eventually have to fight them. As someone used to the flowing fight mechanics of Assassin’s Creed and Dark Souls, I was surprised at how basic combat is in Minecraft. You can swing a sword or shoot an arrow. That’s pretty much it. No fancy moves, no quick dodges, no parrying with your shield (though you can block with one).

The most effective early-game fight strategy is to swing your sword once and then back up a few steps. Try to trade blows with a monster in close combat and you’ll likely take significant damage, at least until you acquire better armor.

And don’t underestimate the skeleton archers. They pack a wallop. Try to get close by hiding behind trees or bushes so they can’t shoot you.

Keep track of where you are

Minecraft worlds are huge and it’s easy to get lost. My kids and I lost the very first base we made, much to their chagrin. Getting lost can also be dangerous, especially if you get turned around in a cave and can’t find your way back to the surface. Fortunately, there are a few ways to keep your bearings and always find your way home.

The first is to turn on position coordinates. Go to Settings, then Game, and turn on Show Coordinates. This will display a set of three numbers in-game corresponding to the X, Y, and Z axes. X is your east-west position, Y is your vertical position, and Z is your north-south position. When you make a home base, write down its coordinates, and you’ll always be able to navigate back.

Another trick is to build a tall structure near your home as a visual landmark. I built a series of Ys stacked on top of one another near my castle, which I can see from far away. It’s helped me get back on quite a few occasions.

When you’re in a cave, getting lost is even easier. Torches are your lifeline. As you’re exploring, place them on the wall at regular intervals. In monster modes, these will keep new monsters from spawning in the lit areas. But they’ll also let you know the pathway back. Always put your torches on the same side as you’re entering the cave; I prefer my right. When it’s time to go home, I just turn around and keep the torches on my left. When I come to a junction, I stack two or three torches next to the exit door, or make an arrow out of torches on the ground pointing the way out. If you’re not planning to come back, make sure you collect the torches as you exit so you don’t have to spend time making more.

If you do get irrecoverably lost in a cave, pick a wall and start mining up in a staircase pattern. Eventually, you’ll reach the surface. Just be wary of lava and sudden drops.

And if worse comes to worst, you can kill yourself and respawn. Place everything you want to save in a chest and write down its coordinates. Then die—I usually build a very tall tower and jump off, which also makes it easier to spot your chest when you return. When you respawn, navigate back to your chest coordinates, gather your resources, and head home.

Know where to mine for what

Pretty quickly, you’ll need to start mining for specific resources. Coal will be first, then iron, followed by gold and diamonds. While you can stumble across these resources while exploring, there are far more efficient ways to secure them. All the resources spawn at different vertical locations throughout the game, and there are specific levels that have the highest likelihood of doing so. Coal, for example, spawns most at level Y=96, high in the mountains.  Diamonds, on the other hand, spawn deep underground, with level Y=-57 as the best depth. But even on the right level, you probably won’t find many resources out in the open. Instead, start strip mining.

To strip mine for diamonds, for example, travel down to level Y=-57, walk up to a wall, and dig a two-block-tall tunnel straight ahead, placing torches at intervals. When mining in these deep levels, always carry cobblestone in your active inventory. When you hit an inevitable lava flow, back up quickly and throw down some stone so you don’t burn up. Then turn to the left or right, mine over three blocks, and start digging back in the direction you originally came from. Keep following this back-and-forth grid pattern with two layers between tunnels to maximize the number of blocks you’re exposing. This organization also makes it harder to get lost in your mines.

Lure a gang of chickens (and other animals)

Capturing and raising animals is an important part of Minecraft’s farming mechanic. To capture animals, just hold out a piece of food that they like and they’ll follow you for as long as you’re holding that food and close enough to them. Cows and sheep like wheat, pigs and rabbits like carrots, and chickens? Well, chickens like seeds. It’s fun to lure all of the animals into a pen, where you can feed them in pairs to create babies. However, having a gang of 10 to 12 chickens and their pint-sized offspring following you around the map is arguably the cutest thing in all of video games. I highly recommend taking some time out of your monster fighting to hold some seeds and be stared at by a hungry and adoring flock.