What Is Faraday’s Law of Induction? 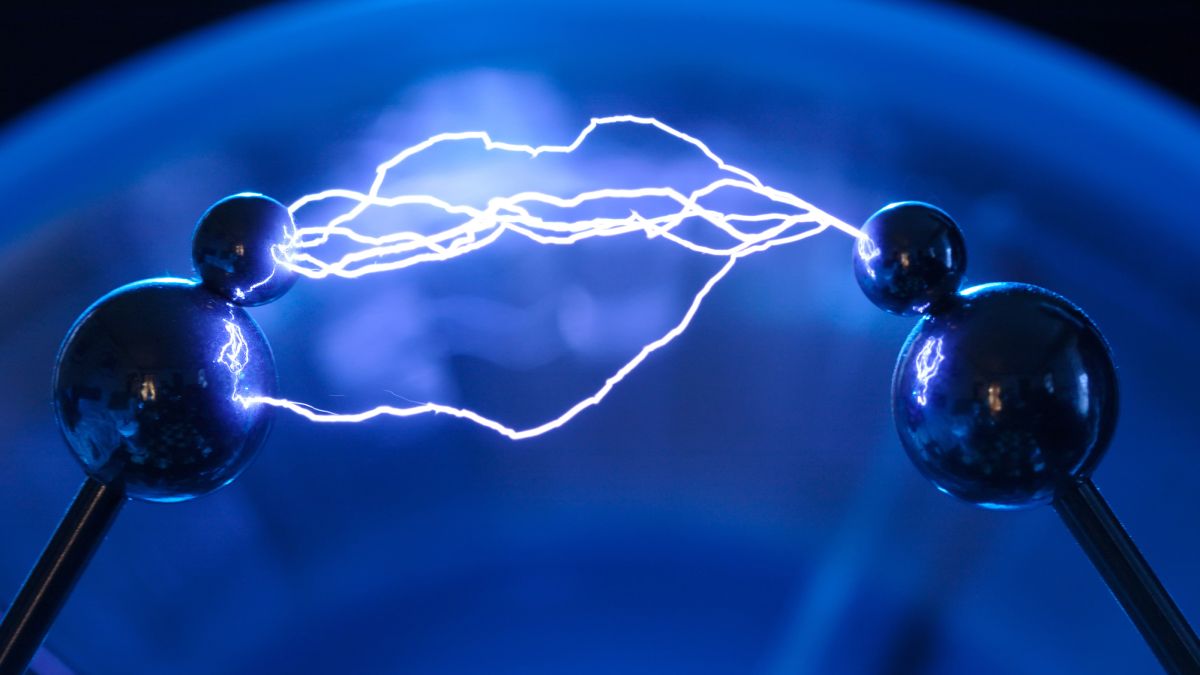 Faraday’s law of induction describes how an electric current produces a magnetic field and, conversely, how a changing magnetic field generates an electric current in a conductor. English physicist Michael Faraday gets the credit for discovering magnetic induction in 1831, but American physicist Joseph Henry independently made the same discovery at about the same time, according to the University of Texas at Austin.

It is impossible to overstate the significance of Faraday’s discovery. Magnetic induction enables the electric motors, generators and transformers that form the foundation of modern technology. By understanding and using induction, we have an electric power grid and many of the things we plug into it.

Faraday’s law was later incorporated into the more comprehensive Maxwell’s equations, according to Sacred Heart University. Maxwell’s equations were developed by Scottish physicist James Clerk Maxwell to explain the relationship between electricity and magnetism, essentially uniting them into a single electromagnetic force and describing the electromagnetic waves that make up radio waves, visible light and X-rays.

Related: 9 equations that changed the world

Electric charge is a fundamental property of matter that governs how some elementary particles in that matter are affected by an electric or magnetic field, according to Britannica. The electric field from a localized point charge — that is, a hypothetical electric charge located at a single point in space — is relatively simple, Serif Uran, a professor of physics at Pittsburg State University in Kansas, told Live Science. He describes it as radiating equally in all directions, like light from a bare light bulb, and decreasing in strength as the inverse square of the distance (1/r2) in accordance with Coulomb’s law, according to Georgia State University. When you move twice as far away, the field strength decreases to one-fourth, and when you move three times farther away, it decreases to one-ninth.

Protons have positive charge, while electrons have negative charge. However, protons are mostly immobilized inside an atom‘s nucleus, so most of the electric currents we’re familiar with come from electrons. Electrons in a conducting material, such as a metal, are largely free to move from one atom to another along their conduction bands, which are the highest electron orbits, according to Austin Community College. A sufficient electromotive force, or voltage, produces a charge imbalance that can cause electrons to move through a conductor from a region of more negative charge to a region of more positive charge, according to Iowa State University. This movement is what we recognize as an electric current.

To understand Faraday’s law of induction, it is important to have a basic understanding of magnetic fields. The magnetic field is more complex than the electric field. While positive and negative electric charges can exist separately, magnetic poles always come in pairs — one north and one south, according to Boston University. Typically, magnets of all sizes — from subatomic particles, to industrial-size magnets, to planets and stars — are dipoles, meaning each has two poles. These poles are called north and south after the direction in which compass needles point. Interestingly, opposite poles attract and like poles repel, so Earth’s magnetic North Pole is actually a south magnetic pole because it attracts the north poles of compass needles.

A magnetic field is often depicted as lines of magnetic flux, according to Florida State University. In the case of a bar magnet, the flux lines exit from the north pole and curve around to reenter at the south pole. In this model, the number of flux lines passing through a given surface in space represents the flux density, or the strength of the field. Notably, however, this is only a model. A magnetic field is smooth and continuous and does not actually consist of discrete lines.

Earth’s magnetic field produces a tremendous amount of magnetic flux, but it is dispersed over a huge volume of space. Therefore, only a small amount of flux passes through a given area, resulting in a relatively weak field. The flux from a refrigerator magnet is tiny compared with that of Earth, but its field strength is many times stronger at close range, where its flux lines are much more densely packed, according to a lecture by UMass Lowell physicist Jean-François Millithaler. However, the field quickly becomes much weaker as you move away.

If you bend the wire into a loop, the magnetic-field lines will bend with it, forming a toroid, or doughnut shape. In this case, your thumb points in the north direction of the magnetic field coming out of the center of the loop, while your fingers point in the positive direction of the current in the loop.

Conversely, if you rotate a wire loop in a magnetic field, the field will induce an electric current in the wire. The direction of the current will reverse every half turn, producing an alternating current, according to the University of Texas at Austin. This is the basis for the electric generator. Importantly, it is not the motion of the wire, but rather the opening and closing of the loop with respect to the direction of the field, that induces the current. When the loop is face-on to the field, the maximum amount of flux passes through the loop. However, when the loop is turned edge-on to the field, no flux lines pass through the loop. It is this change in the amount of flux passing through the loop that induces the current.

Another experiment involves forming a wire into a loop and connecting the ends to a sensitive current meter, or galvanometer. If you then push a bar magnet through the loop, the needle in the galvanometer will move, indicating an induced current. Once you stop the motion of the magnet, however, the current returns to zero. The field from the magnet will induce a current only when it is increasing or decreasing. If you pull the magnet back out, it will again induce a current in the wire, but this time, it will be in the opposite direction, according to the University of Florida.

If you were to put a light bulb in the circuit, it would dissipate electrical energy in the form of light and heat, and you would feel resistance to the motion of the magnet as you moved it in and out of the loop. To move the magnet, you have to do work that is equivalent to the energy being used by the light bulb.

In yet another experiment, you might construct two wire loops, connect the ends of one to a battery with a switch and connect the ends of the other loop to a galvanometer. If you place the two loops close to each other in a face-to-face orientation and turn on the power to the first loop, the galvanometer connected to the second loop will indicate an induced current and then quickly return to zero, according to the University of California, Santa Barbara.

The explanation for this is that a magnetic field causes electrons in a conductor to move. This motion is what we know as electric current. Eventually, though, the electrons reach a point where they are in equilibrium with the field, at which point they will stop moving. Then, when the field is removed or turned off, the electrons will flow back to their original location, producing a current in the opposite direction.

Unlike a gravitational field or an electric field, a magnetic dipole field is a more complex 3D structure that varies in strength and direction according to the location where it is measured, so it requires calculus to describe it fully. However, we can describe a simplified case of a uniform magnetic field — for example, a very small section of a very large field — as ΦB = BA, where ΦB is the absolute value of the magnetic flux, B is the strength of the field and A is a defined area through which the field passes, according to Eastern Illinois University. Conversely, in this case, the strength of a magnetic field is the flux per unit area, or B = ΦB/A.

We can increase the voltage by adding more loops to the circuit. The induced voltage in a coil with two loops will be twice that with one loop, and with three loops, it will be triple. This is why real motors and generators typically have large numbers of coils.

Another important application of Faraday’s law of induction is the transformer, invented by Nikola Tesla. In this device, alternating current, which changes direction many times per second, is sent through a coil wrapped around a magnetic core. This produces a changing magnetic field in the core, which, in turn, induces a current in a second coil wrapped around a different part of the same magnetic core, according to Milwaukee Area Technical College.

The ratio of the number of turns in the coils determines the ratio of the voltage between the input and output current. For instance, if you take a transformer with 100 turns on the input side and 50 turns on the output side and you input an alternating current at 220 volts, the output will be 110 volts. According to Georgia State University, a transformer cannot increase power, which is the product of voltage and current. So if the voltage is raised, the current is proportionally lowered and vice versa. In our example, an input of 220 volts at 10 amps, or 2,200 watts, would produce an output of 110 volts at 20 amps — again, 2,200 watts. In practice, transformers are never perfectly efficient, but a well-designed transformer typically has a power loss of only a few percent, according to the University of Texas at Austin.

Transformers make possible the electric grid we depend on for our industrial and technological society. Cross-country transmission lines operate at hundreds of thousands of volts in order to transmit more power within the current-carrying limits of the wires. This voltage is stepped down repeatedly using transformers at distribution substations until it reaches your house, where it is finally stepped down to 220 and 110 volts that can run your electric stove and computer.

Buffalo State University of New York, “Right-Hand Rules: A Guide to finding the Direction of the Magnetic Force.” http://physicsed.buffalostate.edu/SeatExpts/resource/rhr/rhr.htm